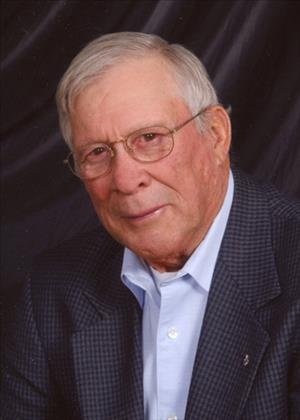 John N. Weber, Jr. "Jack", age 79 of Cannon Falls, died at home following a brief illness on Tuesday evening, December 16, 2014. Jack was born a twin on June 8, 1935 in Hastings, MN, the son of John Sr. and Jeanette (Schaffer) Weber. He lived his entire life at the same residence, the family farm in Douglas Township. He attended Guardian Angels School and later Hastings High School, graduating in 1953. He married Marlys J. Miller on July 14, 1956 at St. Matthew's Catholic Church is West St. Paul. Jack's military service encompassed three honorable discharges from March 2, 1953 to March 1, 1961, one from each of the following: US Navy Air, US Army and US National Guard. Jack was a life-long farmer and active in his church and community. He was a member of St. Joseph Catholic Church in Miesville, and a member of the Knights of Columbus and president of the 4481 Club. He was a charter member of the Miesville Lions, and longtime member of the Cannon Falls Sportsmen's Club. He served on the Cannon Valley Fair Board for 36 years. Jack was a 4-H leader, and an avid outdoorsman. He especially enjoyed hunting. He will be remembered most for his love of his family! He is survived by his loving wife of 58 years, Marlys; children, Gretchen (Steve) Rauchwarter, Scott (Rosann), Sandy Weber-Strandberg, Tim (Rene) and Tom; daughter-in-law, Merrilee Weber; 15 grandchildren and 7 great-grandchildren, Scarlett, Chelsea, Casey, Megan, Ben, Ashley and Kaylee; siblings, twin Jim (Jan), Ann McGree, Harriet Wiederholt, Alberta Horsch and Gerald (Marian); brother-in-law and sisters-in-law, Ed and Donna Miller, and Katy Miller; and many nieces and nephews. He was preceded in death by his parents; brother, Bernard; and sons, David and Douglas. Visitation will be held on Friday, Dec 19 from 4-8 p.m., with a Knights of Columbus rosary service at 7 p.m., at St. Joseph's Catholic Church in Miesville. Mass of Christian Burial will be on Saturday at 10:30 a.m., with visitation from 9:30-10:30 a.m., at church. Interment will follow with military honors at the church cemetery. Memorials are preferred to donor's choice. Active pallbearers will be grandsons, John, Mark, Andy, Steve and Brian Rauchwarter, Nick and Sam Weber, David, Joseph and Jacob Weber, Tyler Strandberg, and Charlie Weber. Honorary pallbearers will be granddaughters, Sianna Weber, Brianna Weber-Strandberg and Hailey Weber; and hunting buddies, Rodney and Cathy Banks, Robert and Marlene Banks, Keith and Ann Gesme, Mike and Linda Siebenaler, Dave and Maureen Fasbender, and Donnie and Darlene Sundheim.

To order memorial trees or send flowers to the family in memory of John Weber, Jr, please visit our flower store.