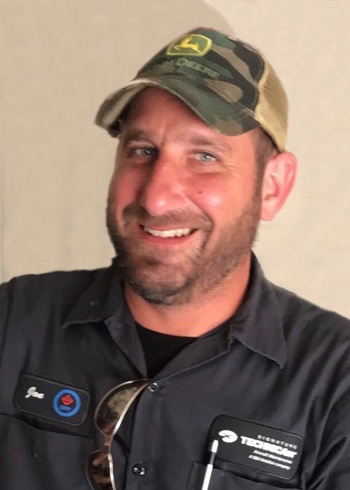 Jon Christopher Wersal, age 43 of Cannon Falls and formerly of St. Peter, died unexpectedly at his home on Saturday, February 8, 2020.

Jon was born on July 22, 1976 in Mankato, MN, the son of Don and Chris (Campbell) Wersal. He grew up in St. Peter and graduated in 1995 from St. Peter High School. He went on to receive his Associates Degree from Hennepin County Vo-Tech for aircraft mechanics and was an aircraft technician for the past 25 years. He married Daitra Kominek in 1999, had three children and later divorced.

An avid outdoorsman, he loved to hunt and share outdoor activities with his children such as many family four wheeler rides, throwing footballs to the kids, and listening to his stereo a little too loud. His favorite place in the world was at the hunting shack in Carlton County. Jon loved spending time with family and friends. He had a very special gift of walking into a room and making friends with anyone he ran into. He was known to speak his mind and was passionate on his viewpoints. He loved to dance, even though some may say he wasn’t good at it, he sure tried his best! He was a talented mechanic and an avid Kid Rock fan! He would give the shirt off his back to anyone and do anything to see a smile on someone's face; whether it be a family member, friend, or complete stranger.

Jon will be remembered as an awesome husband, father, son, brother, brother-in-law, uncle, grandson, cousin, and friend… he will be forever missed by many!

In lieu of flowers, memorials are preferred to the family.

To order memorial trees or send flowers to the family in memory of Jon Wersal, please visit our flower store.