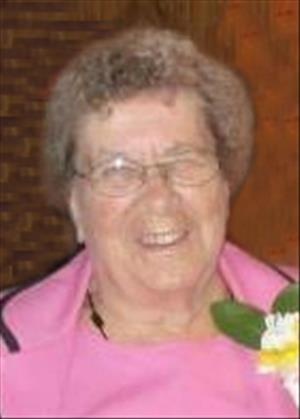 Joyce Marie Hedeen, age 90 of Cannon Falls, died on Wednesday evening, August 3, 2016 at the St. Crispin Living Community – Seminary Home in Red Wing. Joyce was born on September 2, 1925 in Red Wing, the daughter of John and Caroline (Meyer) Banitt. She was baptized and confirmed at Grace Lutheran Church, near Goodhue. She attended District #70 near Zumbrota through the 8th grade. She married Steven A. Hedeen on January 31, 1945 at Grace Lutheran Church and they farmed in Vasa Township. She was a homemaker and was involved in homemakers group in her younger years. She was a member of Vasa Lutheran Church. She loved baseball, and was an avid Twins fan. She enjoyed gardening and her flowers. Her family was very important to her, and she loved spending time together with them! She was known to enjoy playing cards, and winning! Joyce was preceded in death by her parents; her husband of nearly 60 years, Steve on December 11, 2004; a 14 month old son, Thomas; her son, John on May 13, 2003; three brothers, Donald, Harley, and John "Jack" Banitt; and two sisters, Bernice Puppe and Geraldine Banitt. She is survived by her sons, Jim (Sue), Daniel (Shirley), and Dave (Helen), all of Vasa; daughter-in-law, Julie Hedeen of Vasa; 13 grandchildren and 34 great-grandchildren; sister-in-law, Delila Heydeman of Zumbrota; and many nieces and nephews. Visitation will be held on Monday, August 8 from 5-8 p.m. at Lundberg Funeral Home in Cannon Falls. Funeral service will be held on Tuesday, August 9 at 2:00 p.m., with visitation from 1-2 p.m., at Vasa Lutheran Church. Interment will follow at the church cemetery. Active pallbearers will be her grandsons, Greg, Steve, Robert, Casey, Jason, Thomas, and Michael Hedeen. Memorials are preferred to Vasa Lutheran Church, Vasa Museum, and Mayo Clinic-Red Wing Hospice.

with visitation at church from 1-2 p.m.

To order memorial trees or send flowers to the family in memory of Joyce Hedeen, please visit our flower store.