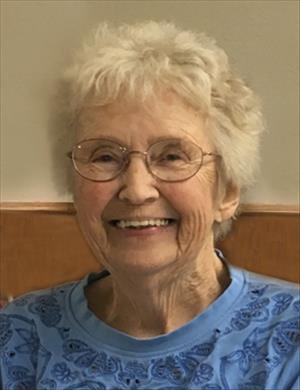 Jule was born at home in Wastedo on September 5, 1930, the daughter of Fred and Hulda "Ruth" (Nelson) Lindholm. She attended Cannon Falls High School. She married Richard Carpenter and together they had eight children. They later divorced.

She worked at several factories in the area and met her future husband, Floyd N. Johnson at Riedell Shoes. They were married May 26, 1973. He died on February 20, 1994. In later years, Jule worked with Goodhue County Home Health Care. She loved her cozy home in Welch, where she enjoyed her birds and flower gardening. Her other passion was the World Vision organization and supporting children in need. Over the years, she was a mentor to many young people. Most recently she attended New River Assembly of God, and enjoyed fellowship in her faith. She is survived by her six children, Julie Hedeen and David (Irene) Carpenter of Welch, Martha "Martie" Eidson of Elgin, IL, Kevin Carpenter of Hannaford, ND, Rosie Sell of Naperville, IL, and Mark (Linda) Carpenter of Zumbrota; 20 grandchildren and 36 great-grandchildren; sisters and brother, Marie Bengtson of Eden Prairie, Ann Hall of Frontenac, and Frank Lindholm of Bloomington; and many nieces and nephews. She was preceded in death by her parents; husband, Floyd N. Johnson; sons, Steven and Michael Carpenter; son-in-law, John Hedeen; grandsons, twins Allen and Jacob Carpenter and J.P. Sell; great-grandson, Ethan Hedeen; and brothers, Arthur, Benneth and Stanley Lindholm.

A Celebration of Life service will be held on Friday, August 25 at 11:00 a.m., with visitation from 10-11 a.m., at New River Assembly of God in Red Wing. Memorials are preferred to World Vision www.worldvision.org.

To order memorial trees or send flowers to the family in memory of Jule Johnson, please visit our flower store.