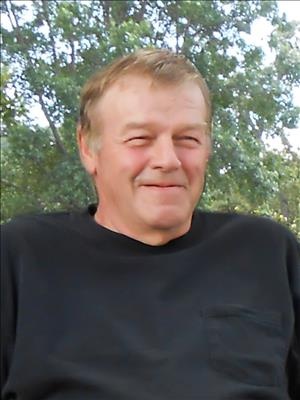 Larry Berg, age 64 of Cannon Falls, died unexpectedly on Monday, July 7, 2014 at his home. Funeral service will be 11:00 am, Friday, July 11, 2014 at Urland Lutheran Church, 6940 County 9 Blvd, Cannon Falls. Visitation will be Thursday from 4:00-8:00 pm at the Lundberg Funeral Home, 5839 Hwy 19 Blvd, Cannon Falls and also for one hour prior to the service at church on Friday. Interment will be in the Prairie Creek Cemetery, rural Northfield. Larry Lee Berg, the son of Joseph and Gladys (Forss) Berg, was born September 19, 1949 in Red Wing, Minnesota. He grew up on the family farm near Cannon Falls and later moved near Hader, Minnesota and graduated in 1967 from Wanamingo High School where he was active in sports. Larry was united in marriage to Lois Rose Kath on February 8, 1969 in Morristown, Minnesota. They lived in Bellchester where he was employed as a mechanic at the Majerus Garage until they moved to Miesville in 1977. They enjoyed many years there where they raised their family and he worked as a truck driver for SCPF Industries. In 1987 they moved to Cannon Falls. Larry was currently employed by John A. Dalsin Roofing where he worked for the past 20 years as a shop foreman. Larry enjoyed motorsports and took a special interest in hot rods, mud racing and truck pulling. He especially enjoyed working side-by-side with his son Cam. They remodeled an old school bus to customize it for truck pulling excursions. He was a member of the Cannon Cruisers and also had served as a volunteer fireman while living in Miesville. Larry enjoyed fishing, when he was able, and spending time outdoors. Lately he took an interest in bird watching. He was very active in the lives of his children through the years and adored his grandchildren. He is survived by his wife of 45 years, Lois of Cannon Falls; son Cameron (Erica) of Cannon Falls, daughter Holly of Cannon Falls; grandchildren, Kelli, Brittany and Landon Thomas, Tyler Foster, Peyton and Daniel Berg, Lyryck No; siblings, Gloria (Ray) Poncelet of Goodhue, Shirley Jensen of Cannon Falls, Janet (Raymond) Kivi of Pasadena, TX, Tony (Vicki) of Red Wing, Harriet (Gary) Peterson of Wanamingo, Evelyn (Peter) Wedde of Bay City, WI, Carol Berg of Minnetonka and Brenda Berg (Ed Hufford) of Lake City; many nieces and nephews, cousins and extended family. Larry is preceded in death by his daughter Heidi Thomas; parents Joseph and Gladys and brother Kevin. Casketbearers will be Bruce, Randy and Fred Kath, Joe and Mark Berg and Chad Peterson.

To order memorial trees or send flowers to the family in memory of Larry Berg, please visit our flower store.