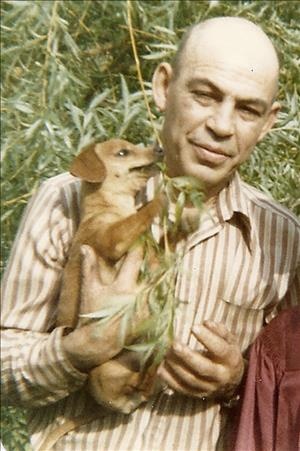 LaVerne Dale Schuette, age 81 of Cannon Falls, died February 20, 2014 at St. Mary's Hospital in Rochester. Funeral services will be 2:00 pm Tuesday, February 25, 2014 at Lundberg Funeral Home, 5839 Hwy 19 Blvd, Cannon Falls. A visitation will be held on Monday, February 24, 2014 from 3:00-7:00 pm and also for one hour prior to the service on Tuesday. Interment will be in the Stanton Cemetery, Stanton, MN. LaVerne was born January 24, 1933 in Northfield, Minnesota to Henry and Emma (Estrem) Schuette. He attended Northfield High School where he graduated in 1952. He was employed at the Farmington Creamery for 17 years where he was a pasteurizer. On November 17, 1956 he was united in marriage to Jean Henderson in Farmington, Minnesota where they built a home and lived until moving to Cannon Falls in 1965. LaVerne worked at Minnesota Malting for many years until his retirement in 1995. LaVerne enjoyed collecting clocks through the years, working on cars, going to auctions and spending time on the lawn mower. He is survived by his children, Gordon (Kathy) of Farmington, Kent (Gerri) of St. Paul and Vernon of Wanamingo; daughters, Debbie Schuette of Goodhue, Rita Hudson of Red Wing, Bonnie (Kevin) Gillispie of Cannon Falls and LuAnn (Dennis Norstad) Franklin of Cannon Falls; 16 grandchildren, Chassie and Robert Clemens, Travis, Ryan and Corey Schuette, Tanya Landry, Renee and Tyler Gillispie, Andy and Darleen Acuff, Kelly, James and Sara Franklin, Matthew and Gina Schuette and Angela Lewis; 14 great-grandchildren; brother-in-law Bob Henderson of Farmington and nieces and nephews. He is preceded in death by his wife Jean in 2002; parents and brother Donald. Active pallbearers will be Travis, Ryan and Matthew Schuette, James Franklin, Tyler Gillispie, Robert Clemens, Corey Schuette and Andy Acuff. Honorary bearers will be Chassie Clemens, Tanya Landry, Renee Gillispie, Kelly and Sara Franklin, Gina Schuette and Darleen Acuff.

To order memorial trees or send flowers to the family in memory of LaVerne Schuette, please visit our flower store.