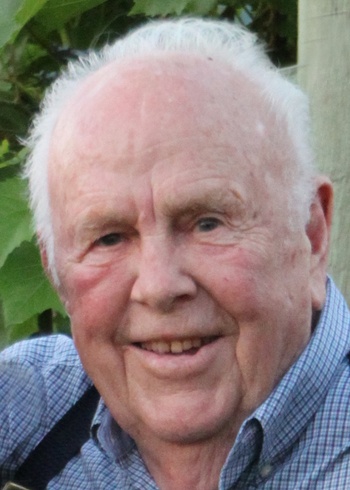 Lawrence Charles was born in Red Wing, MN on August 28, 1931.  He grew up on the family farm in Belle Creek, MN and attended a rural elementary school where he graduated as valedictorian, before graduating from Cannon Falls High School in 1949.  He joined the US Army as a member of the Military Police Corps in 1952, serving for almost two years in Korea and earning the Korean Service Ribbon, the United Nations Service Medal, the National Defense Service Medal, and two Bronze Service Stars before being honorably discharged in 1954.

After serving in the military, Larry moved to Milwaukee, WI and worked for Falk Machine Shop.  He worked various construction jobs before beginning his own excavating business, Larry O’Connor Excavating in Pewaukee, WI.  After officially retiring in 2013, he continued to do occasional excavation jobs in the area.

Larry’s garage was always open to neighbors, friends, and family to share good cheer and friendship.  In his free time, he could often be found watching a Packers or Brewers game.  He was an active church member at Queen of Apostles parish, a member of the VFW, and enjoyed meeting friends for morning coffee.  He also made frequent trips to visit family in Minnesota, and enjoyed occasional travels to Florida and Ireland as well.

Larry was preceded in death by his parents, Michael and Florence, and his siblings Ralph, Robert (Lorraine), Fr. Michael, Dorothy (Ted) Brown, Joseph (Jeannette), and Edward (Geraldine).  He was a beloved friend and neighbor, and a beloved uncle to 25 nieces and nephews, as well as many grand nieces and nephews.

A visitation and Mass of Christian Burial will take place locally on Saturday, April 14, 2018 at St. Columbkill Catholic Church in rural Goodhue.  Visitation will be held from 10 am-12 pm, with the funeral mass at 12 pm. Interment with military honors will follow at the church cemetery.

To order memorial trees or send flowers to the family in memory of Lawrence O'Connor, please visit our flower store.