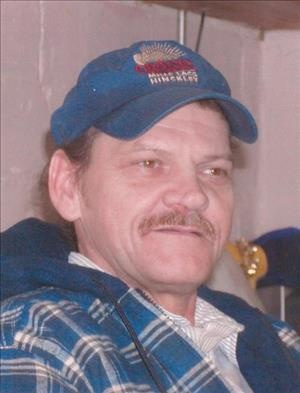 Lenny V. Wengel, age 55 died Saturday, December 15, 2012 in Red Wing at his daughter's home under the care of his family and hospice. A memorial service will be 4:00 pm Wednesday, December 19, 2012 at The Lundberg Funeral Home, 5839 Hwy 19 Blvd, Cannon Falls, MN with Rev. Bradley Berglund officiating. A visitation will be held for one hour prior to the service at the funeral home. Lenny Vernon Wengel was born October 6, 1957 in Cumberland, Wisconsin to the parents, Vernon and Arlie (Ladd) Wengel. He grew up in Minneapolis the second of five children. He was married to Cheryl Triden and they resided in Minneapolis where they raised their two children. Lenny worked as an electrician for many years and was also a long time employee of Walker Roofing where he worked as a hot tar roof installer. A serious fall on the job in 2000 forced him to an early retirement. Lenny enjoyed his family and appreciated being able to spend the past 9 years living with his daughter Brooke and watching his grandchildren grow up. He was a dedicated Minnesota Vikings fan who wore his "purple" proudly. Lenny was an handyman, he enjoyed fishing and was a lover of music. He had a special relationship with his Jack Russel Terrier, Arthur, who was always found by his side. He is survived by is daughter, Brooke Smith (and fiancé Bobby Rose) of Red Wing; son Jerome Wengel of Dayton, MN; grandchildren, John Paul, Myla and Kayla; father, Vernon Wengel of Crosby, MN; special friend, Rose Iverson of Minneapolis; sisters, Kathy of Duluth, Kim of Howard Lake, Sam of Duluth; brother Terry (Sherry) of Apple Valley and many nieces and nephews. He is preceded in death by his mother Arlie.

To order memorial trees or send flowers to the family in memory of Lenny Wengel, please visit our flower store.