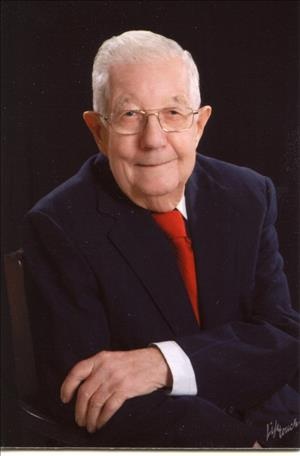 Leo Forss, age 94, a long time resident of Cannon Falls, passed away unexpectedly at his home on March 10, 2014. Mass of Christian Burial will be 11:00 am Friday, March 14, 2014 at St. Pius V Catholic Church, 410 W. Colville, Cannon Falls. Visitation will be held on Thursday from 4:00-8:00 pm at Lundberg Funeral Home, 5839 Hwy 19 Blvd, Cannon Falls. A private interment will be held at St. Pius V Catholic Cemetery at a later date. Leo Willis Forss was born February 24, 1920 in Stratford, WI to the parents, Lenard and Madeline (Robertson) Forss. He grew up on the family farm and attended country school nearby. He was working at a machine shop repairing farm equipment when he entered the US Navy in 1942. Leo and Florence Huhnstock were married on December 9, 1944 while he was on a brief leave during his military service. After his discharge they returned to Wisconsin for a short time before moving to Cannon Falls where they enjoyed many years raising his children and building them a home south of town. Leo worked at National food store and later delivered milk for several years before landing a job in road construction and operating heavy equipment, which he enjoyed until he retired in 1982. Leo's greatest joy in life was spending time with his family. He had 59 wonderful years with his wife, Florence. He enjoyed time with each of his young children and was thee to guide them into adulthood. Over the years, he was blessed with many wonderful sons-in-law, grandchildren and later great-grandchildren. He also enjoyed wood working, feeding birds, playing with his grandchildren, fixing things around the house and spending time on his John Deere. During their "golden years" he and Florence traveled to many states in their motorhome. He was a member of the Knights of Columbus, VFW, Military Honor Squad and Local 49er Union. As a testament of his commitment to Florence during the latter part of her life Leo displayed his deep love for her as he attended to her care. Leo is survived by 7 children, Ann Marie (Bill) Sylvander of Hastings, MN, Patricia (Fred) Kruger of Leesburg, FL, Leona Schutz of Inver Grove Heights, MN, Glenn Forss of Wasillia, AK, Cheryl (Mark) Mitchell of San Diego, CA, Darlene (Mike) Hoffman of Cannon Falls, Kathleen (Jim) Feidt of New Trier, MN; 17 grandchildren, Frank Sylvander, Alan (Karla) Sylvander, Jen (Jim) Sadlovsky, Jackie (John) Schutz, Tim (Erin) Schutz, Matthew (Rebecca) Forss, Mark Forss, Sarah, Leah and Michael (Amanda) Forss, Renee Hoffman, Erin (Branden) Moriarity, Angie (Rob) Vorse, Andy and Ryan Johnson, Megan and Joe Feidt; 12 great-grandchildren, Olivia, Brookelyn, Croix, Ryder, River, Creed, Hannah, Michael, Brook, Autumn, Xavier and Harper; brother, Maynard (Jan) Forss of Wanamingo, MN; son-in-law, Dale Johnson of Red Wing, MN and many nieces and nephews. He is preceded in death by his wife, Florence in 2004; daughter Jeanne Johnson; brothers Donald and Melvin Forss.

To order memorial trees or send flowers to the family in memory of Leo Forss, please visit our flower store.