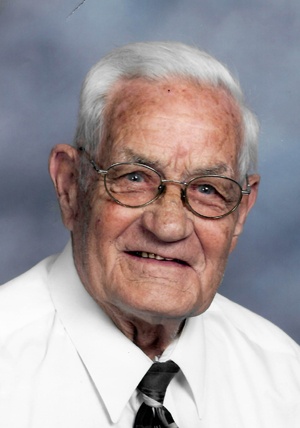 Leslie Lee Elias was born on Feb. 7, 1924, in Goodhue, the son of Charles and Hazel (Conover) Elias. He grew up and went to school in Goodhue. After leaving school, Les farmed on his own as a teenager. In 1943, during WWII, Les had grown “sick of farming” and he joined the US Army. He served in the infantry in the Philippines and in Japan at the end of the war. He also was a cook and baker for the army.

After his discharge, on April 26, 1947, Les married Esther Froyum at the Lands Lutheran Church in Zumbrota. He farmed again, and they lived all around the area; in Goodhue, Wanamingo and Kenyon. In 1965, Les and Esther moved to Cannon Falls, where he owned and operated Elias Plumbing and Heating for forty years. He was a member of St. Ansgar’s Lutheran Church. Les was well known for enjoying coffee with friends and family, playing cards, and woodworking.

A memorial gathering will be held on Friday, March 18, from 1:00 – 4:00 pm, at the O2 Event Center in Cannon Falls. Interment with military honors will be in the St. Ansgar Lutheran Cemetery, at 2 pm, Saturday, March 19th.

To order memorial trees or send flowers to the family in memory of Leslie Elias, please visit our flower store.