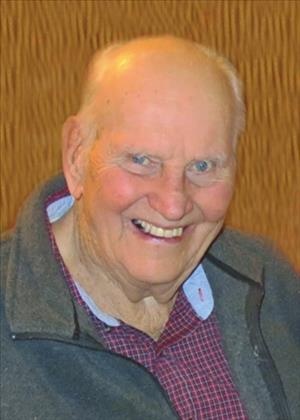 Lester Edward Flom, age 88 of rural Dennison, died at his home on Saturday, August 16, 2014 of pulmonary fibrosis. Lester was born July 21, 1926 on the family farm in rural Dennison near Sogn to John L. and Inga (Kolstad) Flom. He was the grandson of Lars and Ingeborg Flom and Christian and Gertrude Kolstad, both pioneer settlers in the Little Cannon Valley. He was sure he grew up in the best place a boy could. He had hills and woods to explore, hunt and ski. The river was for swimming, fishing and skating. Lester attended school at District 52, a one room country school. Later he attended high school in Cannon Falls and the School of Agriculture in St. Paul. He spent seven years in the U.S. Navy and was an overseas veteran of WWII and the Korean Conflict. He traveled the Pacific from Alaska to Australia and from California to China with many interesting stops. Lester was in China before it became a communist country. In the spring of 1945 diplomats from all over the world gathered in San Francisco to form a new worldwide organization. Lester was assigned to a group providing security and support for them. The new organization was called the United Nations. They were sure this organization could prevent wars in the future. In 1948 he was involved in the testing of atomic bombs six, seven and eight in the Marshall Islands. Lester began farming March 15, 1952 on the land where his parents and grandparents farmed before him. On June 21, 1952 Lester married Doris Quam at Urland Church. They were truly farming partners. Lester enjoyed many fly-in fishing trips to Canada. He also enjoyed hunting caribou, elk, deer and antelope. He was a Twins and Vikings fan. Lester was an avid reader. Even as a boy he thought a book was a great gift. Since retiring he had checked out more than 1500 books from the Cannon Falls Public Library. He is survived by Doris, his wife of 62 years; five children, Julie (Gary) Warner, Pam (Steve) Tralle, Kathy (Daryl) Bergs, Eric (Melanie) Flom, and Evan (Mary Ann) Flom; six grandchildren, four step grandchildren, seven great-grandchildren and five step great-grandchildren; and many nieces and nephews. He was preceded in death by his parents; sisters, Gladys Berquam, Emma Berquam, Alice Ross, and Myrtle Cummings; and brothers, twins Joseph and Johnny Flom. Visitation will be Friday, August 22 from 5-8 p.m. at Lundberg Funeral Home in Cannon Falls. Funeral service will be held on Saturday at 11:00 a.m., with visitation from 10-11 a.m., at Urland Lutheran Church in rural Cannon Falls, where he was baptized, confirmed and married. Interment with military honors will follow at the church cemetery. In lieu of flowers, memorials are preferred to Urland Lutheran Church. Active pallbearers will be nephews, Darryl Flom, Robert Flom, Richard Berquam, Robert Banks, David Flom and Jeffrey Jacobson. Honorary pallbearers will be Harland Berquam, Jim Berquam, Allen Berquam, John Flom, Leslie Flom, and his Godchildren, Nancy Flom Ryan, Dennis Flom, Russell Urevig, Beth Sviggum Kapner, Debbie Fremouw Huber, and Becky Quam Phillips.

To order memorial trees or send flowers to the family in memory of Lester Flom, please visit our flower store.