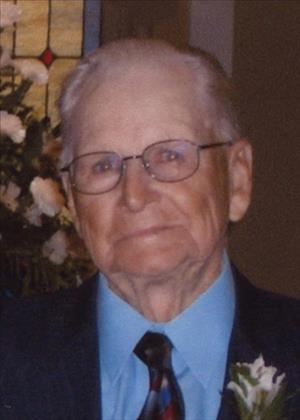 Lloyd Almer Martenson was born near Goodhue, MN on July 26, 1920 to Clarence and Myrtle (Johnson) Martenson. He passed on to heaven on Tuesday, April 5, 2016 at Mayo Clinic Health System - Lake City, MN. Lloyd attended grade schools in Goodhue, Spring Garden and Vasa. Following 8th grade he went to work for a local farmer. When he was 15 his family moved to a rental farm one mile south of Vasa which was later purchased and turned into a dairy operation, farming with his father, Clarence and later son, Duane. He married Jean E. Erickson on September 1, 1945 at Vasa Lutheran Church. He had worked at Julian's Store in Vasa picking up supplies in St. Paul and delivering groceries locally. He cut logs in the area and brought them to the farm where he turned them into lumber on his sawmill. He loved riding horses as a young man and flying small planes at the Stanton Airport. His love of flying stayed with him his whole life. He even enjoyed a plane ride on his 94th birthday. He was active in the community serving on the Vasa Lutheran Church board, Farmers Elevator board, Vasa Township board and Vasa School board. Lloyd loved being a farmer and rarely missed a milking. He would tell his family that all he needed was found in Goodhue County. He was always willing to help his neighbors and those in need. Hospitality was important having coffee for anyone stopping by including salesmen. In his last years he spent many hours each week mowing lawn and driving his 4-wheeler around the farm with his dogs to check out the crops. He was proud of his farm and his crops. His family was very important to him. He liked when the grandchildren and great grandchildren visited the farm so he could give them rides. He was preceded in death by his wife of 63 years, Jean; his parents; brother, Curtiss Martenson of Vasa; sisters, Gladys Barghusen and Eunice Nadeau, both of Red Wing; and son-in-law, Karl Lunder of Red Wing. He is survived by his son, Duane Martenson of Vasa; his daughter, Diane Lunder of Red Wing; three grandchildren, Eric and Ellen Lunder and their children, Leo and Ethan of St. Paul; Matthew and Brigid Lunder and their children, Maria, Samuel, Elijah and Abigail of Mount Lake Terrace, Washington; Rachel and Jeff Stenerson and their children, Luke, Anthony, Jarrett and Jacey of Tyler, MN. Visitation will be held on Friday, April 8 from 4-7 p.m. at Lundberg Funeral Home in Cannon Falls. Funeral service will be Saturday, April 9 at 2:00 p.m., with visitation from 1-2 p.m., at Vasa Lutheran Church. Interment will follow at the church cemetery. Active pallbearers will be Eric Lunder, Matthew Lunder, Jeff Stenerson, Steve Hyllengren, Cody Hyllengren, and Bruce Nadeau. Memorials are preferred to the Vasa Lutheran Church and Mayo Clinic Health System - Red Wing Hospice.

with visitation at church from 1-2 pm

To order memorial trees or send flowers to the family in memory of Lloyd Martenson, please visit our flower store.