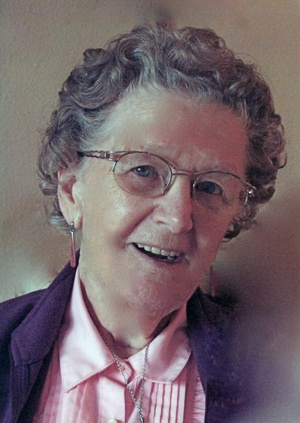 Louise Lydia Benson Robinson was born on November 30, 1919, the daughter of Oren and Lydia (Traeger) Benson. She was baptized and confirmed at First English Lutheran Church. On June 1, 1940 Louise was united in marriage to Wilmer Robinson. The couple farmed in Stanton Township where they raised four sons. They were active members of First English Lutheran Church. Louise enjoyed singing in the choir and was a member of what is now the WELCA group. She enjoyed baking and won many blue ribbons at local fairs and also won a Pillsbury Bake-off Contest. She loved gardening, especially flowers and won blue ribbons for her flowers as well. In her late 50’s Louise started ceramic classes which led to china painting classes. She began teaching china painted in her 70’s up until her mid 90’s. She won many blue ribbons for her china. Louise enjoyed traveling with Wilmer, family, and friends. She enjoyed spending winters in Arizona, entertaining family and friends, and playing cards. Following Wilmer’s death she moved into Cannon Falls.

She was preceded in death by her parents, her husband Wilmer, granddaughter Becky Robinson, sister Corrine Jesme, and brother Carl Benson.

Funeral services will be held at 11:00 am, on Wednesday, January 10, 2018 at First English Lutheran Church, 511 W. Belle St., Cannon Falls, MN  55009. Visitation will be on Tuesday, January 9, 2018, from 4-7:00 pm at the Lundberg Funeral Home, 5839 Highway 19 Blvd, Cannon Falls, MN  55009. There will also be visitation on Wednesday, one hour prior to the service at the church. Interment will be in the Stanton Cemetery. Memorials are preferred to First English Lutheran Church.

To order memorial trees or send flowers to the family in memory of Louise Robinson, please visit our flower store.