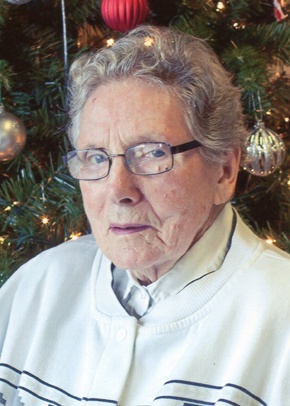 Luella was born on December 22, 1924 in St. Croix Falls, WI, the daughter of Calvin James and Minnie Belle (LeBaron) Carpenter. She graduated from Forest Lake High School and went to MN Bible College, where she met and married Roy David Nelson in December, 1949. They lived on a farm near Cannon Falls. They were loyal members of the Church of Christ in Cannon Falls, where she played piano and organ.

Her hobbies were cooking, baking, gardening, and crocheting. Roy passed away in 1962, and she married Dean Poe in 1963.

She is survived by her children, Rolla Jane Boersma, Carla Nelson, and Laura Luke; ten grandchildren and many great-grandchildren; sister, Mary Walsten; and many nieces and nephews.

She was preceded in death by her parents; her husbands; and children, Lester Poe, Leatrice Poe, Maurice Nelson, and Gwendolyn Poe.

Interment will be held later at the Cannon Falls Cemetery.

To order memorial trees or send flowers to the family in memory of Luella Nelson Poe, please visit our flower store.