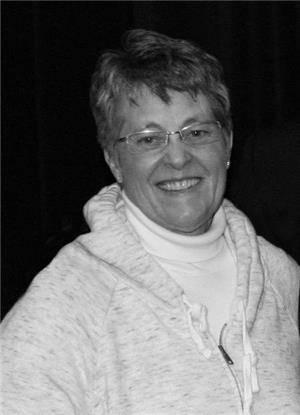 Lynda Rose Bogenrief (Perrizo), 63 of Cannon Falls, died peacefully September 2, 2012; husband, children, Terry (sister) by her side, at North Memorial Residential Hospice. Lynda died following complications during the resection of a meningioma brain tumor. She was born December 15, 1948 in Blue Earth MN, to Kermit and Rosamond Perrizo. Raised in Aberdeen, SD, she attended St. Mary's Catholic grade school and graduated with the first class at Roncalli Catholic High School in 1967. While attending college at Northern State University, she met her future husband, Bill Bogenrief. On August 19, 1968 she married him at St Mary's Church. They continued to live in Aberdeen in the homes of Bill's family, began their own family, and eventually relocated to the Twin Cities area in 1970.

Lynda worked for National City Bank and the First National Bank of Hopkins until 1978. She devoted much of the middle of her life to her family; successfully raising three children and schooling one husband. In 1992 she earned an associates degree in accounting from Dakota County Technical College, and worked for several years in accounting. Lynda retired from working in 2010, and enjoyed reading, baking, gardening, traveling, RV camping, and the winter weather of Arizona; but mostly she loved and enjoyed her grandchildren, and spending time with them, her siblings, and her friends.

At the family's request; in lieu of flowers, please consider a donation to the Alzheimer's Foundation of America. A Catholic Mass will be held on Thursday, September 13, 2012 at St Pius V Catholic Church in Cannon Falls, MN at 10:00 a.m. Father Fernando Ortega will officiate. A burial service will be held at St Mary's Cemetery in Aberdeen, SD at 10:30 a.m. on Saturday, September 15, 2012 with Father Joseph Holzhauser officiating.

To order memorial trees or send flowers to the family in memory of Lynda Bogenrief, please visit our flower store.