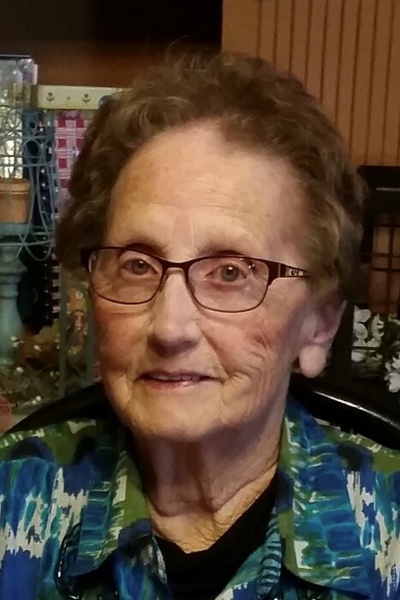 Margaret Ann “Peggy” Ryan of Goodhue, entered eternal rest on May 29, 2020. She was born to Francis and Nora (Siewert) O’Connor on August 23, 1931, in Red Wing. Peggy grew up in Cannon Falls, but also loved the country and spent childhood summers on the farm with her grandmother Annie Siewert and uncle Arnie Siewert. She graduated from Cannon Falls High School in 1949.

After high school, Peggy lived in Minneapolis, where she worked at Dayton’s and IDS.

On the fateful night of St. Patrick’s Day, 1950, Peggy met the love of her life, Chuck Ryan. They danced the night away to the music of the Polka Dots, hence the beginning of their dancing days and their life together. Peggy and Chuck were married on a very cold January 28, 1951 at St. Pius V Catholic Church, Cannon Falls. They raised their children in the beautiful countryside of Goodhue and Zumbrota. Peggy’s extraordinary gifts, talents, and skills were exemplified in her great life’s work as a mother and homemaker. As you would expect with a large family, she spent a lot of time in the kitchen! She was especially known for her delicious homemade biscuits and chocolate chip cookies. Peggy’s love, gentle spirit, faith, patience, courage, dedication, generosity, gratitude, and humor helped to inspire her family through all stages of life - the ordinary days, the milestones and celebrations, and the times of challenge and loss. Peggy and Chuck cherished their days together until his passing in November of 1995.

Peggy was very proud of her family and was their number-one cheerleader! She was often seen in the audience attending a basketball, football, baseball, or volleyball game, a concert, an academic event, a dance recital, or other special event for her grandchildren and great grandchildren. Peggy treasured time spent with friends, whether it was sporting her pretty chapeau for the monthly “Red Hats” outing; sharing stories and laughs at morning coffee; meeting at the local establishment for taco Tuesday; reminiscing with the‘49ers (high school classmates); or the memorable birthday celebration at the Coffee Mill when President Obama walked in the door, joining the group for photos and birthday wishes. Her travel highlights included a January escape to Arizona, experiencing a 100-degree temperature difference upon returning to frigid Minnesota; exploring Ireland and meeting relatives; enjoying the Grand Ole Opry in Nashville; and seeing the inner workings of the Capitol in Washington, D.C. When Peggy wasn’t out and about, she could be found relaxing in her recliner cheering on the Vikings, Twins, and Gophers, watching a classic movie, or mastering a crossword puzzle. She was a member of Holy Trinity Catholic Church, the Council of Catholic Women, and the Belva-dear Homemakers extension group.

With daily support from family caregivers for the past eighteen months, Peggy was able to live out her life in the comfort of her home, for which her entire family will be forever grateful. We will dearly miss our beautiful mom, grandmother, and great grandmother, but our hearts will find comfort in her heavenly reunion with those she loved and has missed all these many years.

A private family mass will be held at St. Columbkill Catholic Church, with interment at St. Columbkill/Holy Trinity Cemetery. Memorials to the American Cancer Society or National Alliance on Mental Illness of Minnesota.

To order memorial trees or send flowers to the family in memory of Margaret "Peggy" Ryan, please visit our flower store.