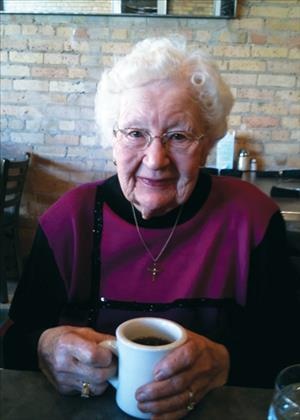 Marie Elizabeth Hernke (Thomas), 97, Cannon Falls, MN, passed away on February 9, 2015. Daughter of the late Ida and Peter C. Thomas, she was born in Minco, Oklahoma on June 4, 1917. Marie is preceded in death by her husband Otto and daughter-in-law, Mary, and is survived by son, Don Hernke and his wife Julie Allis of Cannon Falls, MN, and daughters, Sharon Brown and her husband Jerry Brown of Stillwater, MN, and Nancy Hernke and her husband Ron Harry of Minneapolis, MN. She is also survived by grandchildren Matt (Natasha) and Ben (Emily) Brown, Lisa (Ron) Schoonmaker and Phillip and Hilary Hernke, eight great-grandchildren and sister-in-law Dorothy Thomas. Marie's first interest in hospitality began when she was a waitress at her in-laws' restaurant in Marquette, Michigan. After moving to Cannon Falls in 1947, Marie and Otto took their first "foodie" step by building a turkey farm. Shortly thereafter, as Marie's interests leaned more toward "Chicken Kiev" than turkey- raising, they opened a restaurant called The Edgewood, which became the stage for Marie to expand and showcase her cooking talents… especially her talent for making Lemon Meringue Pie. She remained working at the Edgewood until she was 81, but her love of hospitality never stopped. She continued to feed family, friends, neighbors and friends of neighbors – whoever she sensed was in need of a chat, a cookie, a slice of pie or a hot cup of coffee. In 1995, Marie was inducted into the Minnesota Restaurant Hall of Fame. Marie Elizabeth Hernke cherished her friends, her family, her customers, her church, her community… and Lemon Meringue Pie. The family will be hosting a celebration of her life at Urland Lutheran Church in Cannon Falls MN on March 7th at 11:00 am. Lunch to follow. As an option to flowers, donations may be made to the Urland Lutheran Church or the Cannon Falls High School Culinary Arts Scholarship Fund, ISD 252.

To order memorial trees or send flowers to the family in memory of Marie Hernke, please visit our flower store.