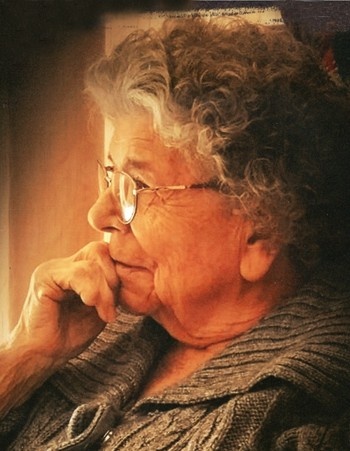 Marilyn was born in Bovey, MN, on October 8, 1930, the daughter of Emil and Nina (Bracken) Larson.  She attended a rural country school in Loman. She married Albert L. Cook on June 8, 1946 in Baudette, and they farmed in the Ray, MN area.  She loved raising chickens, and would have as many as 500 at times.

She had worked for years at Ric-Jig Tackle and Holiday Inn, until starting her day care program in 1980. She lived in International Falls until 1993, when she and Albert moved to Warrens, WI. They then moved to Cannon Falls in 2001. While in Cannon Falls, she was a member of First English Lutheran Church, and volunteered at the Cannon Falls Food Shelf.

Marilyn loved gardening and canning fruits and vegetables.  She enjoyed picking wild blueberries, strawberries, and raspberries and making jams and sauces. One of her favorite pastimes was playing cards. She was widely admired for her embroidering skills and made many kitchen towels, pillow cases, and doilies as gifts for family and friends.  Her greatest joy was spending time with her family, especially her grandchildren. Marilyn was truly a caregiver to all; from foster and daycare children to her father, siblings, nieces and nephews, grandchildren and great-grandchildren. She was always ready to nurture, care for, and guide. Everyone she cared for and those that cared for her will always remember her sweetness and hilarious sense of humor.

A memorial service will be held on Sunday, February 11 at 3:00 p.m., with visitation from 2-3 p.m., at Lundberg Funeral Home, Cannon Falls. Honorary pallbearers will be her grandchildren.

To order memorial trees or send flowers to the family in memory of Marilyn Cook, please visit our flower store.