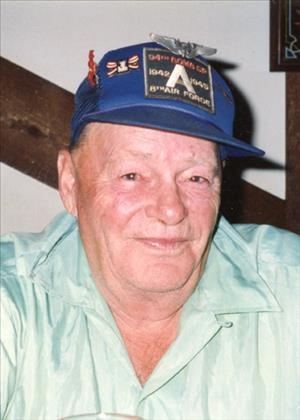 Mark Elmer Westvik, age 92, formerly of Cannon Falls, passed away on Monday, June 8, 2015 at North Ridge Health and Rehab in New Hope, following a long battle with many health ailments. Mark was born on April 15, 1923 in Red Wing, MN, the son of Gustav and Clara (Moorhouse) Westvik. Mark had one sister, Dena. He graduated from Cannon Falls High School in 1941 and went on to enlist in the US Army Air Corps. He flew 25 missions over Germany as a waist gunner on a B-17 during WWII. After his military service, he married Betty Davidson from Seattle, WA. They had six children. He provided for his family by working for the US Postal Service. He had a hobby farm in Sogn. He was a hunter of many things and collected anything he thought was of value. He collected stamps, semi precious metals and other lost objects around Cannon Falls. You could always see Mark searching the streets with a car antenna as a cane to help him find his treasures! His best stories were of the money he would find on his hunts. He also enjoyed horseshoes, and playing in the New Year's Day tourney every year. Mark is survived by his sons, Curtis of Cannon Falls and Richard "Rick" of Madras, OR; daughter, Tina Haddenham and her husband, Wayne of Puyallup, WA; 11 grandchildren and many great grandchildren; and nieces, nephews and a few cousins. He was preceded in death by his wife, Betty; sister, Dena Mayhlem; and his three sons, Clark "Butch", James, and Corwin "Cory". A committal service with military honors will be held on Tuesday, June 16 at 12:15 p.m. at Fort Snelling National Cemetery. Glenn Schulz, Chaplain of VFW Post #4452, Cannon Falls will officiate. We will meet at Assembly Area #2 at noon. Memorials are preferred in lieu of flowers.

To order memorial trees or send flowers to the family in memory of Mark Westvik, please visit our flower store.