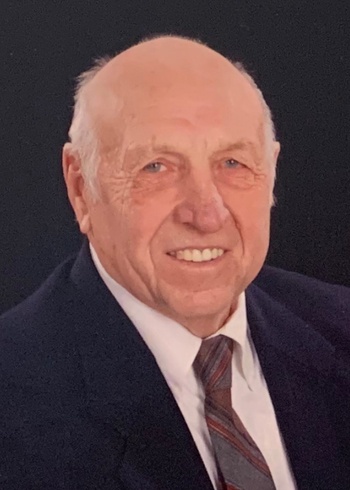 Marvin Leo Rohr, age 89, of Red Wing and formerly of Cannon Falls, died at his home at Deer Crest Assisted Living on Saturday, March 19, 2022, after a long illness with Alzheimer’s.

Marvin was born on the farm in Cannon Falls, MN, on January 22, 1933, the son of Mathias and Teresa Rohr. Marvin attended Cannon Falls school until the 8th grade. He received his GED in the Army when he enlisted in 1955. Marvin served in the Korean War and received an honorable discharge.

Marvin was a very generous man and would give the “shirt off his back”.  He loved to joke around and play pranks. He had many famous sayings, which his family called “Marvisms.” He was hardworking and very dedicated to his church and faith. Marvin was a long-time member of St. Pius V Catholic Church, Cannon Falls.  He was a member of the Knights of Columbus for decades.

Marvin was a crop farmer and raised cattle and hogs.  The family farm was Marvin’s joy. He also worked as a laborer. He enjoyed going to nearly every auction or garage sale in the area and looked for “good deals” and would ask, “did I pay too much?” Marvin spent years following his children to many sporting events and then his grandchildren to various events. Sitting on bleachers and in lawn chairs was a way of life.

He was preceded in death by his parents, Mathias and Teresa; wife, Marilyn; and his brothers, Niles Rohr, William Rohr, and Ray Rohr.

Mass of Christian Burial will be held on Saturday, March 26 at 11 am, with visitation from 9:30 am -11 am, at St. Pius V Catholic Church, Cannon Falls. Interment will follow at the church cemetery. This service will be live-streamed and available to watch below.

Memorials are preferred in his memory to St. Pius V Catholic Church Refresh & Renew campaign or a charity of your choice.

Honorary urn bearers will be all his great grandchildren.

To order memorial trees or send flowers to the family in memory of Marvin Rohr, please visit our flower store.