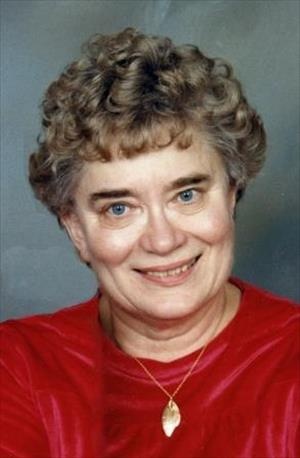 Mavis Beverly Schanink Bostrom, age 89 of Edina, formerly of Cannon Falls, died Monday, May 5, 2014 at Heritage of Edina Senior Living Community. A memorial service will be held at 10:00 am on May 17, 2014 at River of Life Church, 800 Vermillion Street, Hastings with visitation one hour prior at the church. Memorials can be given to Women's Quilting Ministries at River of Life Church. Mavis was born January 24, 1925 in Huron, South Dakota, the daughter of Lewis M. and Nellie (Anderson) Rogers. She graduated from Huron High School as Valedictorian of her class prior to the family relocating to Minnesota where she attended nurses training, along with her sister Marie at the Mounds Midway Nursing School in St. Paul. Mavis was married to Robert Schanink in Madison, South Dakota. Robert's employment took them to Colorado, and Minneapolis before moving to Cannon Falls in 1961. They made their home near Lake Byllesby where they raised their children. When the children were a little older, Mavis worked as a nurse at the Cannon Falls Hospital. They also lived in Burnsville from 1975 until they divorced in 1992. Mavis loved to read and also passed on a legacy of love for music to her grandchildren. She even learned to play the piano in her 60's. She loved her grandchildren and was known as "Grandma M". She was married to David Bostrom on December 12, 1996 and enjoyed several years together while living in Bloomington. They both resided at Heritage of Edina. Mavis is survived by three Children; daughter, Janice (David) Winnes of Brownsville, MN; son, Gerald (Jeanne) Schanink of Cannon Falls; son, Daniel (Cindy) Schanink of Hot Springs, AR; 12 grandchildren; Geri (Kent) Geiken, Mary (Bruce) Ketchum, Joel (Katie), Rachel, Rebecca, James (Anna Di Puma), Jonathon, Merci and Benjamin Winnes, Joy (Steven) Ford, Travis (Annie) Schanink, and Jessie (Jon) Carpenter; six Great-Grandchildren; Megan Geiken (fiance' Brandon Breithaup), Mitch and Josh Geiken, Melissa Feyierson, Zoe and Stella Carpenter, Evan and Maggie Schanink; sister, Marie Erickson; brother, Bill (Dorothy) Rogers, Bob (Alice) Rogers; sister-in-law, Ruth Rogers and numerous nieces and nephews. She is preceded in death by her parents; husband, David Bostrom in 2012; brother, Orvin Rogers; and sisters, Marilyn Bridge, Val Rogers and Marlene Bland.

To order memorial trees or send flowers to the family in memory of Mavis Bostrom, please visit our flower store.