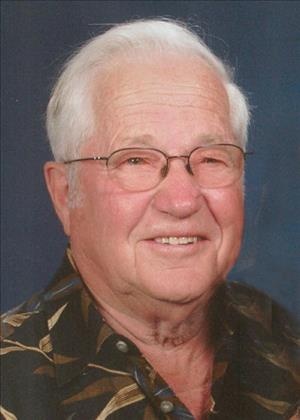 Merle Herbert Johnson, age 84, a lifelong resident of Cannon Falls, died on Monday evening, September 9, 2013 at St. Mary's Hospital in Rochester. Merle was born at home in Cannon Falls, the son of Otto and Anna O. (Anderson) Johnson. He graduated from Cannon Falls High School, and worked for 44 years at Lee Chevrolet in Cannon Falls as an auto body repairman and manager. He also worked as the roller rink manager above Lee Chevrolet for many years. He married JoAnne Gustafson on May 28, 1949 at Vasa Lutheran Church, and they lived much of their married life in the home where Merle was born. Merle was a member of First English Lutheran Church, where he had served on the church council. He had also been an active member of Masonic Oriental Lodge #34. Throughout his life he enjoyed hunting and fishing, spending time at their cabin near Turtle Lake, WI, playing cards, and camping. He was a youth firearms instructor, enjoyed taking shut ins for drives, and loved to golf in his later years. He also enjoyed his morning Brewster's coffee buddies. Merle had 64 years with his love, JoAnne and they enjoyed dancing, wintering in Florida for 20 years, their family time and walks together. He loved his family, and especially loved spending time with his grandchildren. He will be remembered as a kind, gentle, and loving man. He will be greatly missed by all who knew him. He is survived by his wife, JoAnne; children, Jack (Carol) of Clinton, NJ, Michel (Shirley) of Cannon Falls, Mary Kay (Tim) Johnson of Kasson, and Lorinda Johnson of Northfield; 9 grandchildren, Luke (Kelly), Erik (Lily) and Mark Johnson, Rachael (Scott) Sorby, Dan (Angela) and Anna Marie Johnson, John, Katie Jo and Jessica Olson; 4 great-grandchildren, Kai and Rhys Johnson, Gage and Isabella Sorby; brothers, Kenneth and twin, Merlyn, both of Cannon Falls; sisters-in-law, Charlotte DeYoung and Lola Johnson, both of Cannon Falls; and many nieces, nephews and their families. He was preceded in death by his parents; brothers, Clarence "Donkey", Eddie, Theodore "Ted" and Robert; and sisters, Florence Cartwright, Doris Egge, and Vivian Quist. A memorial service will be held on Friday, September 13 at 11:00 a.m., with visitation from 10-11 a.m., at First English Lutheran Church in Cannon Falls. Interment will follow at the Cannon Falls Cemetery. Visitation will be held on Thursday from 4-7 p.m., with a Masonic Service at 7:00 p.m., at Lundberg Funeral Home in Cannon Falls. In lieu of flowers, memorials are preferred to the First English Lutheran Church Building Fund, Alzheimer's Foundation, or donor's choice.

To order memorial trees or send flowers to the family in memory of Merle Johnson, please visit our flower store.