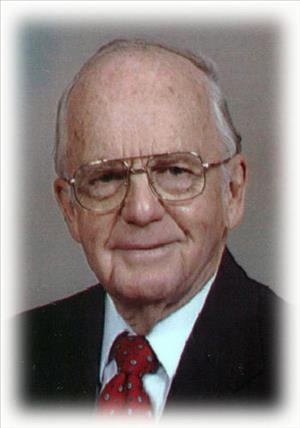 Merlyn Jim Olson, age 92 of Northfield, MN, died on Saturday evening, March 16, 2013 at Three Links Care Center in Northfield. Merlyn Jim Olson was born on May 5, 1920 in Cannon Falls, MN the son of Carl and Leone Olson. Jim graduated from Cannon Falls High School in 1938 and from St. Olaf College, Northfield in 1948. WWII interrupted his studies as he served in the US Army with the 30th Evacuation Hospital unit's surgical team in the South Pacific, attaining the rank of Technical Sgt. Merlyn Jim Olson and Ora Peterson were united in marriage December 28, 1946 at Vasa Lutheran Church in Vasa, MN. They lived in Northfield where Jim returned to St. Olaf College, graduating with degrees in business and art. Jim worked for Good Year Tire and Rubber Company for 8 1/2 years as store manager in several locations in the Midwest. In 1956 Jim went to work for Investors Diversified Services (IDS) in Des Moines, IA until his retirement in 1985. During their 54 years in Des Moines, Jim was an active member of Windsor Heights Lutheran Church, Walnut Creek YMCA, and Senior Singers. Jim was a talented calligrapher with his own part time business. He enjoyed volunteering his sign making skills to his church and community. Jim and Ora raised three children and enjoyed family vacations fishing in Minnesota and traveling to California. Jim was an enthusiastic contester and won a trip to the 1956 Rose Bowl, a trip to a Cotton Bowl, and in 1963 won a lakeside cabin located in Paynesville, MN where good times were had with family and friends. After Jim's retirement he enjoyed attending Army reunions with the men and women of the 30th Evacuation Hospital where he served for 29 months in the South Pacific. They were all family and those relationships remained strong. Jim and Ora moved from Des Moines back to Northfield in January 2008, and enjoyed reuniting with friends and relatives and making new friends. Jim is survived by his wife Ora; sons Craig (Dixie) Olson of Santa Barbara, CA and Jeffrey (DeAnn) Olson of Freeland, WA; daughter Christine (Charley) Kapp of Iowa City, IA; three grandchildren, Brooke (Kurtis) Blunt, Joseph Kapp and William Kapp; four great-grandchildren; and three nieces. He was preceded in death by his parents and infant brother, Carl Marshall Olson. At Jim's request there will be no memorial service. At a later date, there will be a private interment at Vasa Lutheran Cemetery in Vasa, MN. Memorials can be made to Hospice of Northfield, MN.

To order memorial trees or send flowers to the family in memory of Merlyn Olson, please visit our flower store.