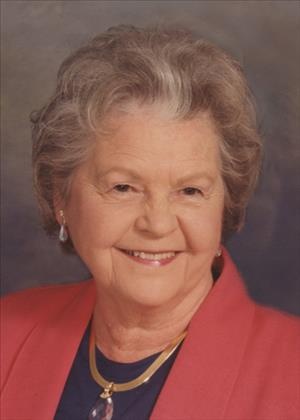 Merry Jo Johnson, age 90, of Cannon Falls, died peacefully at her home at Twin Rivers Senior Campus on Friday morning, February 12, 2016. Merry Jo was born on July 30, 1925, in Grand Rapids, MN, the daughter of Sherman W. and Pauline V. (Oberg) Arends. During her early childhood years the family lived in various places in Minnesota, including Fort Snelling and Civilian Conservation camps, where her father was called to serve as pastor. When her father was called back to serve as a chaplain in the US Army, they moved to Tacoma, WA, where Merry Jo graduated from high school in 1943. The family moved to other Army bases, where Merry Jo sang in USO shows, including one starring Red Skelton. She received her Bachelor of Arts degree from UCLA in theater and music, working at the Bel-Air Country Club in Los Angeles during her university days. She met other celebrities during that time, including Esther Williams (they were members of the same church), Bing Crosby, and Bob Hope. In 1949, she went to work as a stewardess at Northwest Airlines, where she met her future husband, Herbert Johnson. They were married on March 30, 1951, at Fort MacArthur in California. They moved back to the Johnson family farm in White Rock in 1954. Merry Jo was an active member of St. Ansgar's Lutheran Church, where she sang with the church choir for many years. She volunteered for Meals on Wheels and was active in the Tuesday Club. She was one of the founding members of the Cannon Falls Historical Society, a member of the Bridge Club and, in her earlier years, served as director of the local Community Theater. She enjoyed spending time with family and friends, traveling the world, and gatherings at the Vet's Club. To her grandchildren and great grandson she was "Grandma Jo Jo," the one who would break into song hearing just a few lyrics of the hundreds of songs she knew. Reading stories and singing lullabies was her way of coaxing tired children to sleep. She is survived by her two daughters, Diane Johnson of Cicero, IL, and Linda Johnson, of Cannon Falls; son and daughter-in-law, Scott and Tesha Johnson, of Cannon Falls; grandchildren, Erik Johnson, Shea-Lynn (Luc) Ramthun, and Lindsey Johnson; great-grandson, Alek Ramthun; and nieces and nephews. She was preceded in death by her parents, Sherman and Pauline Arends; her husband, Herbert, in 2013; and her sister, Jinny Thompson, in 2001. Visitation will be held from 4-7 pm on Monday, February 15 at Lundberg Funeral Home in Cannon Falls. Funeral service will be held on Tuesday, February 16 at 11 am, with visitation from 10-11 am, at St. Ansgar's Lutheran Church in Cannon Falls. Spring inurnment will be at Cannon Falls Cemetery.

To order memorial trees or send flowers to the family in memory of Merry Johnson, please visit our flower store.