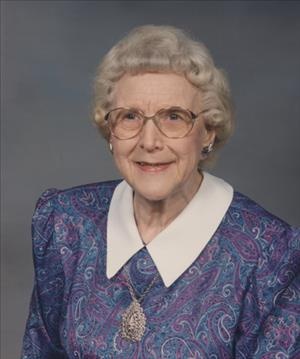 Mildred E. Jacobson, age 97, of Cannon Falls died Wednesday, May 24, 2017 at the Gardens of Cannon Falls. Mildred "Milly" Eleanor Jacobson was born December 22, 1919 to Anna (Ring) Jacobson and Joseph Jacobson. She attended District 45 and graduated from 8th grade and then attended Kenyon High School for four years. After her high school graduation she attended a Normal Training session for one year, graduating and receiving a limited certificate for teaching in rural public schools. She taught for 3 years in District 48, Goodhue County and for one year in District 60, after which she moved to Minneapolis and attended Minneapolis Business College for a year. Milly began an eight year employment with Carnegie Dock & Fuel as a general secretary and later took employment with the Hennepin County Municipal Court in the Conciliation Court Department where she was employed for 32 years and met her requirements to retire at the end of 1981. Milly belonged to Hennepin Avenue United Methodist Church and was an active member of the Wesleyan Service Guild and served as President of the 140-membership group as well as many years as secretary and treasurer. She also had served on the Eidsvold Cemetery Board as Secretary/Treasurer for many years. She lived in Minneapolis until May of 2007 when she moved to Cannon Falls and lived there until she passed away. She is survived by her brother, Wally (Kathy) Jacobson of Cannon Falls and sister-in-law, Arlis Jacobson of Zumbrota and many nieces and nephews. She was proceeded in death by her parents, brothers, Chester, Everette, James, Eugene, Robert, Allan and sisters, Helen and Janet.

Funeral services will at 1:30 p.m., Saturday, May 27, 2017 at Lundberg Funeral Home. Visitation will be one hour prior to the service. Interment will be in the Eidsvold Cemetery.

To order memorial trees or send flowers to the family in memory of Mildred Jacobson, please visit our flower store.