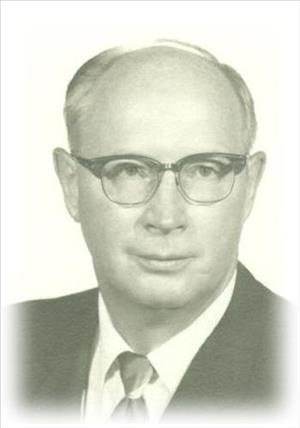 Milford Anthony Manley, age 95 of Cannon Falls, died on Thursday morning, August 2, 2012 at his daughter's home in Cannon Falls. Milford was born in Plato, Saskatchewan, Canada on September 25, 1916, the son of Robert Anthony and Genevieve (Harris) Manley. He graduated in 1935 from Loretta High School in Caledonia, MN, and married Gladys M. Weber on November 19, 1941 in Caledonia. He started working for Northwest Airlines in 1942 and spent the war years in Alaska and the Aleutian Islands serving with the US Air Force from 1944-45. He retired from Northwest Airlines in September, 1978 and moved to Florida, returning to Minnesota in 2004. He was preceded in death by his wife of 69 years, Gladys; grandson, Scott Swenson; and grandson John Charnell's wife, Becky. He is survived by his daughters, Jean (Bob) Beckman of Cannon Falls and Connie (Orv) Swenson of No. St. Paul; grandchildren and their families, Rich, John and Colleen Charnell, Bryce Beckman, and Angie Vinson. A Memorial Mass will be held on Wednesday, August 8 at 10:30 a.m. at St. Pius V Catholic Church in Cannon Falls, followed by a luncheon in the church basement. Interment with military honors will be held at a later date at Fort Snelling National Cemetery. In lieu of flowers, memorials are preferred to the Alzheimer's Association and American Cancer Society.

To order memorial trees or send flowers to the family in memory of Milford Manley, please visit our flower store.