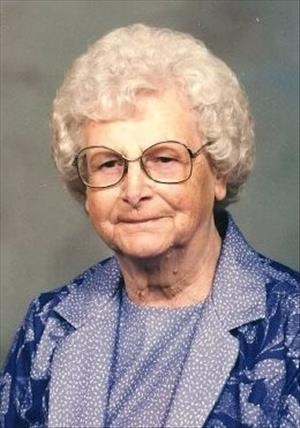 Minnie Marie Hokanson, age 103 of Cannon Falls died November 29, 2013 at Angels Care Center in Cannon Falls. Funeral service will be 1:30 pm, Wednesday, December 4, 2013 at Minneola Lutheran Church, 13628 Co. 50 Blvd, Goodhue. Interment will be in the church cemetery. Visitation will be Tuesday, December 3 from 4:00-7:00 at Lundberg Funeral Home, 5839 Hwy 19 Blvd, Cannon Falls and also for one hour prior to the service at church. Minnie Marie (Karlstad) Hokanson was born on June 20, 1910 in Coleman, South Dakota to Paul and Hannah (Randen) Karlstad. When she was 5 years old they moved to Three Forks, MT where they lived for seven years. The family packed up everything from the farm (including the animals) and the moved to Belle Creek Area. For a few years Minnie had been working with farm families and took care of the needs in their home. Minnie met Thore at the Cannon Falls Fair and they were married September 7, 1929 at the Land's Parsonage in Zumbrota. They farmed in the area and spent many of those years in the Cherry Grove area. In 1952, they moved to a farm near Hader, MN. The past 24 years were spent at her daughter, Marlene's home. Minnie has been a resident at Angel's Care Center since May 2012. Minnie was an energetic lady who loved her family very much and liked being close to them. She had many talents. With the help of the family she published a family cookbook, (nothing was as delicious as her homemade bread and cinnamon rolls), she was a poetry writer and has a book of poems also published. The words of the song, "You Are My Sunshine" were written by Minnie. In her earlier years she composed a poem for each grandchild upon their birth. She loved all animals especially horses, cows, dogs and cats. She could grow any plant and had quite a collection of them. She was a gardener and quilter. She has made quilts for each grandchild. She was a letter writer and corresponded regularly with relatives in Norway. She was the greatest babysitter and could keep any child entertained with her songs, stories and activities.

To order memorial trees or send flowers to the family in memory of Minnie Hokanson, please visit our flower store.