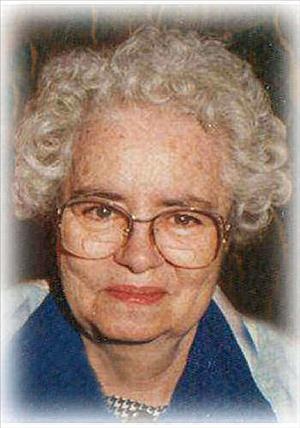 Monica Pearl Pederson, age 91 of Cannon Falls, died on Tuesday morning, January 3, 2012 at the Angels Care Center in Cannon Falls, where she has resided since August 21, 2000. Monica was born on July 25, 1920 in Appleton, MN, the daughter of William "Pearl" and Mathilda (Ahern) Sanders. She graduated from Hector High School in 1937, and later married James H. Pederson on February 22, 1941 at St. John's Catholic Church in Hector, MN. They moved to Northfield, and then later to New Ulm. She worked in the dietary department at Loretta Hospital in New Ulm for many years. She and her husband also owned and operated their "hut" at the Renaissance Festival for 15 years, where they sold whistles that Jim had made at the Wooden Whistle Factory. Monica was also a life member of the American Legion Auxiliary and had served as its president while in Northfield. She was preceded in death by her husband, Jim in January, 2001; her parents; three sons, Jimmy, Marvin and an infant; son-in-law, Pete Rodel; and brother, Ambrose Sanders. She is survived by five children, Jeanne Rodel of Paynesville, Martin (Kathy) Pederson of Slidell, LA, Joyce (Michael) Wilson of Randolph, Thomas (Beverly) Pederson of Lake City, and David (Sue) Pederson of Fridley; 12 grandchildren and 7 great-grandchildren; brother, Leslie (Nancy) Sanders of Fayetteville, GA; and nieces and nephews. Mass of Christian Burial will be held on Friday, January 6 at 10:00 a.m., with visitation at church from 9-10 a.m., at St. Pius V Catholic Church in Cannon Falls, with Father Jay K. Kythe celebrating. Interment at New Ulm City Cemetery will follow a luncheon at church, about 1:30 p.m. Active pallbearers will be grandsons, Isaac Pederson, Mark Rodel, Chuck Rodel, Bjorn Pederson and Anders Pederson, and great-grandson, Cody Furlong. Honorary pallbearers will be grandsons, Dale Rodel, Brandon Rodel and Tiger Wilson.

To order memorial trees or send flowers to the family in memory of Monica Pederson, please visit our flower store.