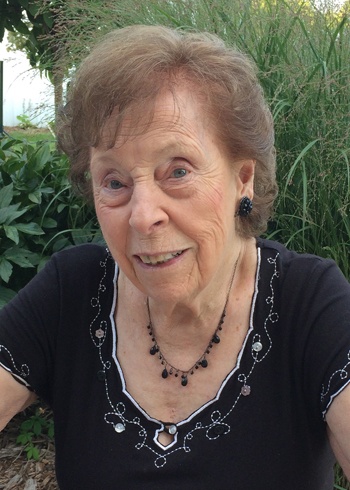 Norma was born on the family farm in Sogn Valley on December 3, 1924, the daughter of Samuel and Clara (Lee) Underdahl. She graduated from Cannon Falls High School, earned a teaching degree through ‘Normal Training’ and taught in Goodhue County rural schools for many years.

On September 28, 1945, Norma married Wilbur Sands of Kenyon. They raised two daughters, Diane and Vicki, and farmed near Aspelund until Wilbur passed in 1992. Norma continued to live on the farm and care for it until her death.

As a devoted mother, Norma made sure her daughters played in the band, acted in school plays and participated in church activities. She taught Sunday School, Bible School, was Ladies’ Aid president and enjoyed Project with neighbor ladies. After retiring she attended many ‘Red Hat’ events and played cards weekly at the Kenyon Golf Club.

When her daughters started school she worked as a waitress at the Cannonball Restaurant in Cannon Falls, which she enjoyed for 36 1/2 years, retiring when she was 80.

Norma was an avid gardener and an excellent cook who loved entertaining. She cherished outings and overnights with her granddaughters, and when they had children, she loved the birthday parties, notes and pictures from their little ones, who called her GG (great grandmother).

Throughout her married life she and Wilbur danced to music of the Polka Dots, led by her brother-in-law, Ray Sands. They enjoyed snowmobiling, traveling with Diane and Vicki on many family trips ‘Out West’, and to Europe and the Scandinavian Countries with Roger Erickson’s WCCO tours.

Norma is survived by her children, Diane Sands (Steve Fraser) and Vicki (Lorn) Manthey; granddaughters, Katie (Jeff) Prose and their children Grace, Jack and Ben; and Kelli (Teddy) Douglass and their children, Baker and Henry; brother-in-law, Ray Sands; nieces, a nephew, and other relatives.   She was preceded in death by her parents; her husband of 48 years, Wilbur; and her sisters, Carol and Audrey.

Her funeral service will be held on Monday, September 13, 2021 at 11 am at Emmanuel Lutheran Church, Aspelund. Visitation will be one hour prior to the service at the church.  Interment will follow at the Emmanuel Cemetery. Memorials are preferred to the Minnesota Landscape Arboretum, the Nature Conservancy, or The Last Hope Animal Rescue in Farmington.

To order memorial trees or send flowers to the family in memory of Norma Sands, please visit our flower store.