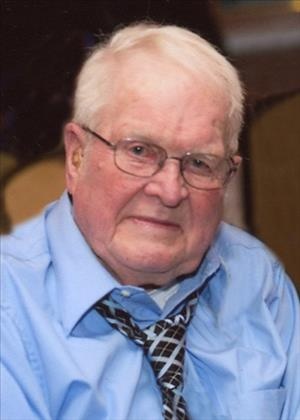 Norman O. Anderson, age 80 of Cannon Falls, died at his home on Saturday evening, February 25, 2017. Norman was born on August 26, 1936 in Red Wing, MN, the son of Delmor and Ruth (Sjoblom) Anderson. He grew up on the family farm and graduated from Cannon Falls High School in 1954. He married Doris M. Detlie on July 13, 1957 at Emmanuel Lutheran Church at Aspelund. They made their home in Leon Township where he farmed all of his life. They raised their family of five children and were active members of Spring Garden Lutheran Church. He and Doris were custodians at the church for 22 years, and Norman also served on the church council. His family was everything to him, and he enjoyed spending time with them. He also was the 4-H softball coach for many years. Along with farming, Norman was a milk hauler and later worked in construction in the Twin Cities area, including Vesta Construction. In 1982, he started Anderson Construction, which he continued to own and operate with his sons. He and Doris loved dancing and traveling together. He had also been on a bowling league for many years with Pagel Trucking and later White Rock Bank. He is survived by his wife of nearly 60 years, Doris; children, Alan Anderson, Pam (Gary) Davis, and Todd (Carol) Anderson, all of Cannon Falls, Terry (Karen) Anderson of Welch, and Dale (Tammy) Anderson of Cannon Falls; 11 grandchildren, Alicia Davis, Isaac (Samantha) Davis, Sarah (Justin) Katke, Renae (Andrew) Doyle, Kayla Anderson, Sammy Anderson, Dylan Anderson, Kaden Anderson, Lyn (Paul) Sweazey, Missy (Clint) Kahn, and Sarah (Dan) Gile; 8 great-grandchildren, Carson Katke, Regen Gitzen, Emily Luken, Morgan Luken, Mathew Kahn, Christian Kahn, Zoe Gile, and Zachary Gile; brothers and sisters, Roger Anderson of Goodhue, Joan (Jim) Freking of Forest City, IA, Elroy (Bobbi) Anderson of Cannon Falls, Gary (Linda) Anderson of St. Cloud, Dan (Vickie) Anderson of No. St. Paul, Charlene (Tony) Kleinschmidt and Marshall Anderson, all of Oronoco, Cheryl (Ron) Grote of Burnsville, Randy (Sue) Anderson of North Branch, and Joe (Marilyn) Anderson of Zumbrota; and several nieces and nephews. He was preceded in death by his parents, and sister-in-law, Audrey Anderson. Visitation will be held on Wednesday, March 1 from 4-8 p.m. at Lundberg Funeral Home in Cannon Falls. Funeral service will be held on Thursday, March 2 at 11:00 a.m., with visitation from 10-11 a.m., at Spring Garden Lutheran Church in rural Cannon Falls. Interment will follow at the church cemetery. Memorials are preferred to Spring Garden Lutheran Church. Active pallbearers will be Isaac Davis, Scott Anderson, Calvin Anderson, Mike Buetow, Kevin Dietz, and Tor Millard. Honorary pallbearers will be his grandchildren and great-grandchildren.

To order memorial trees or send flowers to the family in memory of Norman Anderson, please visit our flower store.