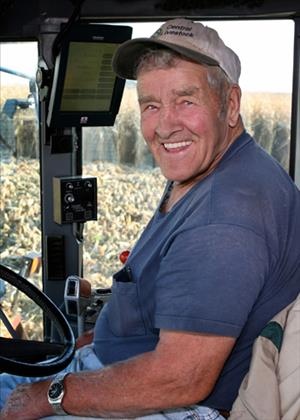 Owen Curtis Hernke, age 88, a lifelong resident of the Cannon Falls area, died peacefully, surrounded by the love of his family, into the arms of Jesus on Friday morning, March 25, 2016 at Mayo Clinic Health System - Cannon Falls. Owen was born on September 2, 1927 in Leon Township, MN the son of Alvin and Ida (Esterby) Hernke. He attended country school and went for one year of Ag School at the University of MN. A true patriot, he served his country. He was drafted in to the US Army in 1950, where he served during the Korean Conflict, receiving the Bronze Star. He was honorably discharged as Sergeant First Class. Owen farmed most all of his life, and was the best steward of the land! He married Gladys Swelland on June 6, 1953 at Hauge Lutheran Church, Kenyon. He enjoyed the outdoors, and spent many hours painting trucks, tractors and detailing the vehicles. He was involved with stock car racing and competing in tractor pulls. Other hobbies included snowmobiling and bowling. His love for eagles and flags were well known. He was a member of Leon Township Board for 33 years and Goodhue County Rural Electric Assn. Board for 32 years. He was an active member of Urland Lutheran Church, and served on the cemetery board. Owen was also a VFW member. He served on the Cannon Falls Hospital Board and the Wastedo School Board. Owen will be remembered most for his love of family! He was an entrepreneur and a visionary, and with his positive attitude, he was an inspiration for all who knew him! He will be long remembered and greatly missed! He is survived by his loving wife of nearly 63 years, Gladys; 7 children, Gwen (Rick) Knowlton of Cannon Falls, Sheryl (Jim) Soule of Lakeville, Mike (Brenda) Hernke of Cannon Falls, Susan Pallin (Jerry Mattson) of Roseville, Dale Hernke, David Hernke (Joni Quam), and Marc (Julie) Hernke, all of Cannon Falls; 12 grandchildren, Stacey (Aaron) Deutsch, Jason Knowlton (Christy Schultz), Jeffrey (Shannon) Soule, Jodi (Eric) Stuart, Nathan (Melanie) Hernke, Nicole (Brian) Hines, Heather Hernke, Ashlee (Jake) Kobler, Amanda Hernke, Stephanie Hernke, Matthew Hernke, and Brandon Hernke; 17 great-grandchildren, Alex and Ethan Deutsch, Casey Jeppesen, Caden Knowlton, Zachary, Ella, and Benjamin Soule, Lillian, Gavin, and Mackenzie Stuart, Blake, Luke, Ava, and Kyle Hernke, Harper and Lauren Hines, and Lyla Kobler; sister, Mildred Ohnstad of Cannon Falls; brother, Al (BettyAnn) Hernke of Cannon Falls; sisters-in-law, Elaine Hernke, Jean Hernke, and Arlene Hernke; and many nieces and nephews. He was preceded in death by his parents, Alvin and Ida Hernke; brothers, Marvin, Elroy and Virgil Hernke; and brother-in-law, Raymond Ohnstad. Visitation will be held on Thursday, March 31 from 4-8 p.m. at Lundberg Funeral Home in Cannon Falls. Funeral service will be on Friday, April 1 at 2:00 p.m., with visitation from 1-2 p.m., at Urland Lutheran Church, Cannon Falls. Interment with military honors will follow at the church cemetery. Active pallbearers will be grandsons, Jeffrey Soule, Nathan Hernke, Jason Knowlton, Matthew Hernke, and Brandon Hernke, and great-grandson, Casey Jeppesen. Honorary pallbearers will be his remaining grandchildren and great-grandchildren. Memorials are preferred in Owen's memory to Urland Lutheran Church or donor's choice.

To order memorial trees or send flowers to the family in memory of Owen Hernke, please visit our flower store.