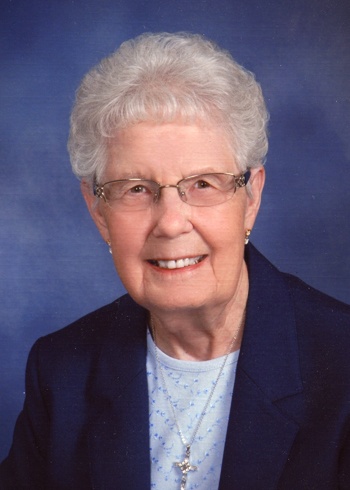 Patsy belonged to the St Ansgar’s Church choir, the Women’s Choir, was an election official, and was a member of the Cannon Falls Golf Club where she won the Women’s Club Championship 3 years among several other trophies. She loved watching her sons play sports, be it football, basketball, track or golf. Patsy also enjoyed knitting, crocheting and needle point, making numerous items for family, friends and seasonal decorations for around the house. Patsy also enjoyed the Saturday morning coffee get togethers with her siblings and their spouses that either took place at her Mom and Dad’s kitchen or in later years at the bakery. A tradition that went on for several years.

She was preceded in death by her husband of 57 years, Louie; parents, Ed and Liz Duncan; aunt, Ruth Hultman; brothers, David Duncan and wife Alice, and Ward Duncan; and sister, Jeanne Holien and husband Leroy.

Cards can be sent to Dave Davisson, 1100 West Minnesota Street, Cannon Falls, MN 55009. There will be a private ceremony held for Patsy at Lakeside Cemetery in Randolph.

To order memorial trees or send flowers to the family in memory of Patsy Davisson, please visit our flower store.