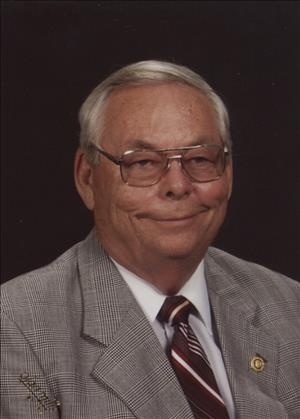 Paul Sabin, age 79, of Cannon Falls, died on Saturday morning, October 10, 2015 at Diamond Care Center in Cannon Falls. Born October 12, 1935 in Thompson, Iowa to Roger & Judith (Peterson) Sabin, Paul attended a one room schoolhouse there until 1948 when he moved to Minneapolis. In 1951 he moved to Huntley, where he graduated from high school in 1953. He attended St. Olaf College in Northfield, and graduated in 1958. Paul served in the United States Army 1958-1960 spending most of his time in Germany. After serving in Germany he did construction work in Frost, MN. In 1964 he moved to Northfield to work at G.T. Sheldahl, where he met Kay Schwartz. They were married in 1967. In 1971 they moved to Cannon Falls, where they lived and raised three children. Paul was very active in the Cannon Falls Community. He served on city council, the hospital board, and First English Church, serving on their council and call committees. He was very active in Rotary, and especially involved in the Rotary Youth Exchange Program. Paul and Kay were a host family for thirteen students from ten different countries. Paul also owned several retail stores in Cannon Falls: Sabin's Appliance, Cannon Valley Marine, and Sabin's Gift & Furniture Restoration. One of the true joys in his life was his six grandchildren. He loved spending time with them, doing projects with them, and spoiling them. Paul is survived by his wife Kay, three children Roger (Kris) Sabin, Mark (Cheryl) Sabin, Lynn (Scott) Lunny; six grandchildren Erica, Ryan, Quinn, Will, Lillian, Emmett; niece Belinda Klose, nephew Bill (Tarii) Klose; along with several other nieces, nephews, and cousins. He was preceded in death by his parents, sister Helen Klose, brother-in-law Ted Elbracht. Visitation 5-8 Pm Tuesday at Lundberg Funeral Home in Cannon Falls. Memorial Service will be held on Wednesday at 11:00 a.m., at First English Lutheran Church in Cannon Falls with gathering 10-11 a.m.. Inurnment will follow at the Cannon Falls Cemetery. In lieu of flowers, memorials to the church, Rotary Youth Exchange or Diamond Rehab & Living of Cannon Valley . Arrangements by Lundberg Funeral Home in Cannon Falls. On-line condolences may be directed to www.lundbergfuneral.com.

and gathering 10-11 a.m. Wednesday at church

To order memorial trees or send flowers to the family in memory of Paul Sabin, please visit our flower store.