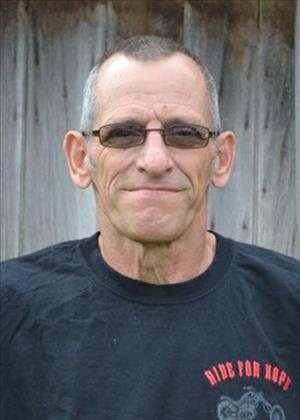 Peter Joseph Otto, age 58 of Cannon Falls, died on Friday, June 10, 2016 at Mayo Clinic Health System – St. Mary's Campus in Rochester. Peter and his twin brother, Paul were born on April 8, 1958 in Hastings, sons of William J. and Dorothy A. (Schultz) Otto. He graduated from Hastings High School in 1977, and later married Elizabeth Biel on August 1, 1986 in Hastings. Pete was employed at Structural Components in Cannon Falls until its closing, and went to work at Zumbrota Tire and Service for the next 20 years. He had also worked at McDonald's in Zumbrota. He then worked at McDonald's in Cannon Falls for 12 years, until retiring due to illness. He and Liz were members of ABATE (American Bikers for Awareness, Training & Education.) He enjoyed fishing, camping, country western music, John Deere tractors, and playing with his four grandchildren. He loved spending time at his brother, Ray's shop, where they rebuilt classic cars, played cribbage, and spent quality time together. He also did auto body work with his brother-in-law, John. He volunteered at the Cannon Falls Food Shelf, and was known to help out anyone in need! He is survived by his wife of nearly 30 years, Elizabeth; daughter, Alicia (John) Janssen of Owatonna and their children, Parker and Leland; son, Peter Jr. of Cannon Falls and his children, Alyson and James; mother, Dorothy (Alan) Sladek of Dundas; ten brothers and sisters, Ray (Toni) of Cannon Falls, Dianne (Fritz) Schiller of Miesville, Shirley (John) Miller of Cannon Falls, Gary (Sheryl) of Cannon Falls, Ed of Hampton, Paul (Deb) of Cannon Falls, Kathy (Steve) Welch of Farmington, Gregg (Nancy) of Cannon Falls, Laurie (Art) Potthoff of White Bear Lake, and Dodie (Ron) Braith of Montgomery; and many nieces, nephews, cousins, aunts, and uncles. He was preceded in death by his father, Bill. Mass of Christian Burial will be on Friday, June 17 at 11:00 a.m., with visitation from 9-11 a.m., at St. Pius V Catholic Church in Cannon Falls. Honorary urn bearers will be his five brothers. Memorials are preferred to cancer research or donor's choice.

To order memorial trees or send flowers to the family in memory of Peter Otto, please visit our flower store.