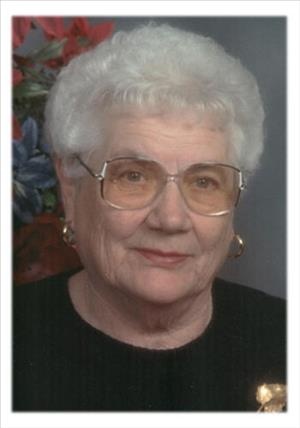 Phyllis Joy Fox, age 86 of Cannon Falls, died on Sunday morning, June 10, 2012 at Angels Care Center in Cannon Falls, where she has been residing since October, 2005. Phyllis was born on November 14, 1925 in Cannon Falls, the daughter of Asa C. and Elizabeth V. (Robinson) VanGuilder. She graduated from the Cannon Falls High School in 1944 and married Harry L. Fox on August 18, 1945 at First Congregational United Church of Christ in Cannon Falls. She worked with her husband at the Standard Station, Falls Motor Company, and Fox's Bar & Grill, retiring in 1983. She was active in the community, and they loved to travel, go camping, and spend time with their family. She was a great mother and grandmother! Phyllis was a member of First Congregational United Church of Christ, and was a member of the Order of the Eastern Star, Zion Chapter #6 for over 50 years. She is survived by her children, Randy (Ruth) Fox of Cambridge, Tom (Stephanie) Fox of Cannon Falls, and Pat (Dale) Baird of Cannon Falls; six grandchildren, Alice Fox, Brian Brandi) Fox, Kelly (Brice) Miller, Kammy (Josh) Huneke, Terry Baird, and Jon (Tammy) Baird; 11 great-grandchildren; uncles and aunt, Charles VanGuilder of Burnsville, Warren and Winnie Fox of Portland, OR; and nieces and nephews. She was preceded in death by her parents; her husband of 53 years, Harry on March 23, 1999; and brothers, Clifford and Gene (Betty) VanGuilder. Funeral service will be held on Wednesday, June 13 at 11:00 a.m., with visitation from 10-11 a.m., at First Congregational United Church of Christ, with Pastor Barbara Martin officiating. Following lunch, interment will be held at Stanton Cemetery. Memorials are preferred to donor's choice. Active pallbearers will be grandchildren, Terry Baird, Jon Baird, Brian Fox, Kelly Miller, and Kammy Huneke, and great-grandchildren, Tommy Miller, Katilynn Borchardt, and Cody Miller. Honorary pallbearers will be granddaughter, Alice Fox, and great-grandchildren, Mattison, Jaeden, Teigan and Brekken Baird, Gavin and Claire Huneke, Alexander and Kallel Fox.

To order memorial trees or send flowers to the family in memory of Phyllis Fox, please visit our flower store.