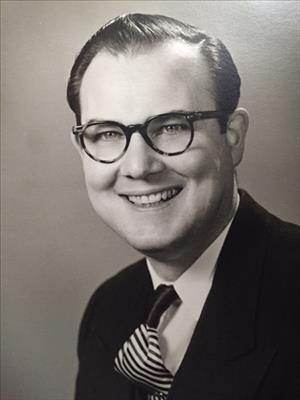 Rev. Stanley Herbert Bean, age 98, formerly of Cannon Falls, passed away peacefully on Friday, February 24, 2017 in Shakopee, MN. Born in Radville, Saskatchewan, Canada he was the son of the late Herbert and Amelia (Hewitt) Bean. Stanley became a US citizen in 1961. Stanley received a Bachelor's Degree from Houghton College in New York, earned a Master's Degree from Columbia University, and completed his doctoral work at Syracuse University. He was the Chairman of the Social Science department at the University of Northwestern. He studied piano under the London Conservatory of Music. He was an accomplished pianist, composer and lyricist. Stanley was an ordained minister, college professor, and social worker. He lived through both world wars. He began preaching at the young age of 15 and eventually had ministered throughout Canada and the United States. He was a wonderful person, voracious reader, thinker, theologian, and champion of social justice. Stanley and Loraine lived in rural Cannon Falls for 40 years. Stanley was a loving husband, father, grandfather and great-grandfather. He bestowed on his family his great love and curiosity as a lifelong learner. He will be forever loved and missed. Stanley is survived by Loraine V. Bean, his loving wife of 70 years; children McLellan (Linda) Bean, Valerie Lee, and Noni Miklya (Nate); grandchildren Cynthia, Calvin and Steven Bean, Jodi Durie (Maurice), Briton Nicholson (Amanda), Robert (Nicole) Lee, Ashton (Colton) Kanstrup, Allison Lee (Tyler), Braden Lee, Kyle Miklya (Anna) and Lindsay Miklya. There are eleven great grandchildren and one great-great grandchild. Stanley participated and ministered in later years at Randolph Baptist Church in Randolph, Minnesota. Our heartfelt appreciation for their love and support. Special thanks to the staff of All Saints Senior Living in Shakopee and Grace Hospice for their outstanding care and kindness. No public service as requested by the family. Memorials preferred to Grace Hospice at 1510 11th Avenue South, Minneapolis, MN 55404.

To order memorial trees or send flowers to the family in memory of Rev. Stanley Bean, please visit our flower store.