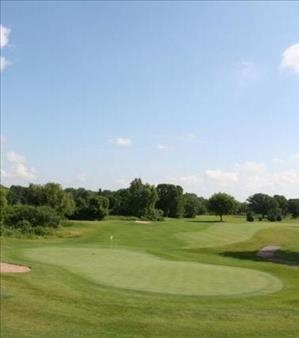 Richard Buck, age 88 of Cannon Falls, died Sunday December 16, 2012 at the Cannon Falls Medical Center. There will be a memorial gathering from 4:00-7:00 pm on TUESDAY, DECEMBER 18, 2012 at the Cannon Golf Club, 8606 295th Street E., Cannon Falls. This informal gathering is open to all. Richard was born September 30, 1924 in Fargo, North Dakota to the parents, Herbert and Louella (Renquist) Buck. He grew up in the Fargo area and attended Fargo High School, graduating in 1942. He attended North Dakota State University before entering active duty in the US Army. During his military service he was stationed in several parts of Europe before his honorable discharge in 1946. On May 6, 1948 he was married to his high school sweetheart, Dorothy JoAnne Washburn in Fargo. They lived in Fargo until the early 1960's and later moved to Cannon Falls where they took over the Renquist Family Farm, a place he spent many summers during his youth. They raised their four children and enjoyed being a part of their activities. Richard worked for the Chrysler Corporation as well as the Toyota Motor Corporation where he served in many different capacities. In 1973 he purchased a Toyota car dealership and operated that until 1985. In the automotive industry he was well respected by his peers and served as the Vice President of the National Toyota Dealers Council. From 1985 until 2010 they enjoyed their home in Phoenix, Arizona, which allowed Richard to enjoy his passion… golfing. He spent many enjoyable hours on a variety of courses and was proud of his accomplishment of getting a "hole-in-one" eleven times. Richard enjoyed socializing and cherished spending time with his family. Richard is survived by his wife of 63 years, JoAnne of Cannon Falls; son, James (Jenny) of San Diego, CA; daughters, Jody Freeberg of Cannon Falls and Jill Buck of Phoenix, AZ; six grandchildren, Cary (Laura) Freeberg, Peter Freeberg, Elizabeth (Joel) McGeough, Aaron Kreisler and Dylan and Sara Smith as well as eight great-grandchildren. He is preceded in death by his parents and daughter, Jane Buck.

To order memorial trees or send flowers to the family in memory of Richard Buck, please visit our flower store.