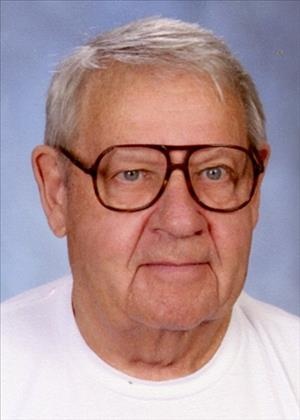 Richard Jasper Carpenter, age 86 of Cannon Falls, died peacefully at home on Tuesday afternoon, June 24, 2014. Richard was born on July 28, 1927 in Cannon Falls, the son of Harry and Louise (Strack) Carpenter. He attended schools in Owatonna and Cannon Falls, and went on to serve with the Merchant Marines during WWII and Army Reserves until 1951. He married Jule Lindholm and they had 8 children together. They later divorced. He married Lynn Cook on September 25, 1976 in Farmington. Richard worked for Cenex for years hauling fertilizer, drove truck for Green Giant, and worked pea pack for John Geischen. He was self employed in scrap metal and blasting. He also worked as a telegrapher for Great Northern and Milwaukee Railroad Lines, retiring after 29 years. On and off for many years, he drove school bus for Hastings and Cannon Falls. He always enjoyed being involved with the school children. He served on the Cannon Falls City Council and Cannon Valley Trail Board. He volunteered with the Zumbrota Area Hospice and Northfield Hospice for many years. He also wrote articles for the TODAY magazine. He was preceded in death by his parents; two sons, Michael and Steven; siblings, James, Harry Jr., Carl, Robert, Edward, Lozetta Lindahl, Frank, Lee, Paul, Mary and Elizabeth. He is survived by his wife of 38 years, Lynn; his children, Julie Hedeen of Goodhue, David (Irene) Carpenter of Welch, Martha "Martie" Eidson of Elgin, IL, Kevin Carpenter of Hannaford, ND, Rosie Sell of Naperville, IL, and Mark (Linda) Carpenter of Zumbrota; 21 grandchildren; 29 great-grandchildren; half sisters, Jane "Bonnie" (Laverne) Holt of Cannon Falls, Alice (Herb) Dabelow of Schaumberg, IL, Marilyn (Lowell) Weinand of Brooklyn Park; and many nieces and nephews. No services will be held at this time. Memorials may be given in Richard's memory to Northfield Hospice, 2000 North Ave, Northfield, MN 55057 or Alzheimer's Association for Cannon Falls area, 3224 – 6th Ave NE, Unit A, Rochester, MN 55901.

To order memorial trees or send flowers to the family in memory of Richard Carpenter, please visit our flower store.