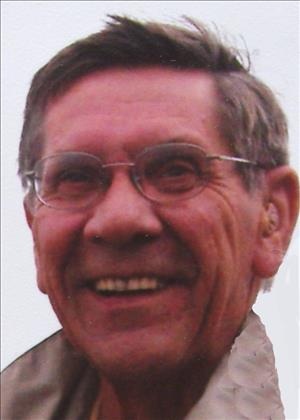 Richard E. Karlson, 75, of Cannon Falls passed away September 20, at the Three Links Care Center in Northfield. He was born February 2, 1939 in Brainerd to Bert and Louise (Konen) Karlson. He attended St. Francis of Assisi, and graduated from Brainerd High School. Richard started working at Schaeffers Red Owl in Brainerd, married Constance Oseid, and raised their four children, Mary, Lars, Abbie and Matthew. Richard joined the Army as a private in active duty, returned to the Brainerd National Guard for 20 years, and spent his last 17 years with the C3rd of the 3rd Army Reserve in Cannon Falls, where he retired as a master sergeant in 1999. Richard managed the Cannon Super Valu from 1982 to 2003. He was a member of the Knights of Columbus and American Legion with a strong support for the Legion baseball team. His commitment, work ethic and deep care for the community will be missed. The ways he mentored, taught and appreciated every worker at the grocery store will be remembered forever. He is survived by his children, Mary (Mike) Dalton of Cannon Falls, Lars (Angie) Karlson of New Brighton, Abbie (Eric) Smith of Liberty, MO and Matthew (Lisa) Karlson of Little Canada; brothers, David and James; sisters, Patty and Eloise; grandchildren, Ethan and Emma Dalton, Zachary, Hunter and Taylor Karlson and Ethan Smith. Richard was preceded in death by his wife, Constance Oseid. Visitation will be held Wednesday, September 24, from 5 – 7p.m. at Lundberg Funeral Home of Cannon Falls. Funeral Mass will be 11 a.m. Thursday, September 25, at St. Pius V Catholic Church, 401 Colvill St. W. of Cannon Falls. With visitation resuming one hour prior. Interment with military honors will follow at St. Pius V Catholic Cemetery. In Lieu of flowers, memorials are preferred to Parkinson Research, Cannon Falls Education Foundation or the Cannon Falls Veteran Memorial.

Resuming one hour prior to the service at church

To order memorial trees or send flowers to the family in memory of Richard Karlson, please visit our flower store.