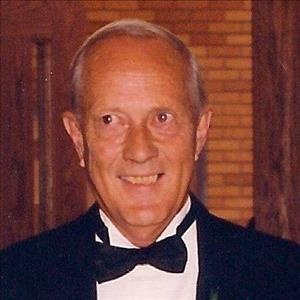 Richard Lee Stock of Cannon Falls died Friday morning, December 26, at Twin Rivers Senior Campus. He was 81 years old. Dick was born March 28, 1933, to Albert and Emma (Manderfeld) Stock in Sanborn, MN. He graduated from Sanborn High School in 1951. In 1952, he joined the UnitedStates Air Force and served at many bases around the country, but his favorite tour of duty was at Elmendorf Air Force Base in Anchorage. He was honorably discharged in 1956. Dick worked for Northwest Airlines from 1958 to 1993. After his retirement from Northwest, he worked at Rod's Liquors, Midwest Importers, and in the school lunch program at the Cannon Falls Elementary School (his favorite job). He was also an avid golfer. Dick was a member of the the Episcopal Church of the Redeemer, where he served on the Vestry and as treasurer, started the Fourth of July Sing Along, and was the head chef for the Community Table dinners for many years. He was a member of the VFW; served on the Cannon Valley Trail Board; and coached little league baseball. Dick married Carolee Louden on May 3, 1969. She survives him. He is also survived by his daughter, Katie Weidner and her husband Kurt Weidner of Randolph; his son, Daniel Stock of Milwaukee, and his wife Megan Pence of Lanesboro; three grandchildren, Ashleigh, Drew, and A.J. Weidner, all of Randolph; one sister, Arlene Landkammer of Clements, MN; sister-in-law, Rita Stock of Rochester; brother-in-law, Michael Louden (Mary Charlson) of Hastings; and many nieces and nephews; and good friends. He was preceded in death by his parents; his step-father, Claude Marks; his brother, Arnold; brother-in-law, Jerry Landkammer; niece, Mary Lou Landkammer; and his mother and father-in-law, Milt and Emery Louden. Funeral services will be held 11a.m. Saturday, January 3 at the Episcopal Church of the Redeemer in Cannon Falls. There will be a visitation on Friday, January 2 from 5:00 to 8:00 p.m. at Lundberg Funeral Home in Cannon Falls.

11:00 AM
Episcopal Church of the Redeemer

One hour visitation prior to service at the church

To order memorial trees or send flowers to the family in memory of Richard Stock, please visit our flower store.