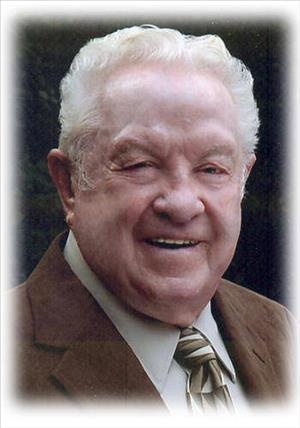 Robert P. O'Gorman, age 85 of Cannon Falls, passed away peacefully at home on Saturday, February 4, 2012. Bob was born in Red Wing, Minnesota on March 4, 1926, the son of Joseph A. and Elizabeth (Farrell) Gorman. He was raised on the family farm in Belle Creek (home of the real fighting Irish) and graduated from Cannon Falls High School. He served in the US Army during World War II. He married his best partner, Delores "Laurie" Haas in 1946. In 1947, Bob became sales manager for Norris Implement Company, selling John Deere farm machinery throughout Southeastern Minnesota. In late 1960, he decided that Cannon Falls needed a supermarket so he and Laurie built and operated Bob's Red Owl where they provided their 7 kids with job opportunities as well as setting an example by their hard work and integrity. For the next 27 years, they owned Red Owl grocery stores in Cannon Falls, Hastings, Fairmont, Farmington, Rosemount, Plainview and Zumbrota, always using each store as an opportunity to get a junior partner, including two sons, started in business and then turning over the reins. He was elected to the Minnesota Food Retailers Hall of Fame in 1996. In addition, Bob and Laurie joined with Sy and Harriet Wiederholt in owning several Red Wing Shoes Stores. Bob was an enthusiastic tenor and 57-year member of the Society for the Preservation and Encouragement of Barbershop Quartet Singing in America, Inc. (Barbershop Harmony Society); he sang with the Mel-O-Dons, a popular quartet that competed internationally. He was a consistent booster of the Cannon Falls business community, serving as president of the Commercial Club as well as being a founding and long-time member of the Cannon Falls Community Hospital Board. Bob also served on the board of directors of Point of Sales, Inc. and Midwest Importers. He is survived by Laurie, his wife of 66 years, and children, Pat of Cottage Grove, Mark (Lynn) of Eagan, Babe (Susan Kronmiller) of Cannon Falls, Tim (Linda) of Hastings, Joe (Sue) of Zumbrota, and Mary of Cannon Falls; and grandchildren, Jake (Fannie) of Portland, OR, Megan (Chris) Polynin of Phoenix, AZ, Ahren (Erin) of Cannon Falls, Brenna of Orlando, FL, Grady of St. Paul, and Joey of Zumbrota, as well as seven great-grandchildren. He was preceded in death by his parents; son Dan O'Gorman; brother, Joe O'Gorman; and sisters, Mary Jarosch and Theresa Walsh. Visitation will be held on Wednesday, February 8 from 4-8 pm at Lundberg Funeral Home in Cannon Falls. Memorial Mass of Christian Burial will be held on Thursday at 10:30 am, with visitation from 9:30-10:30 am and Knights rosary at 10 am, at St. Pius V Catholic Church in Cannon Falls, with Father Jay Kythe and Father Bruce Peterson celebrating. Interment with military honors will follow at the church cemetery. Honorary pallbearers will be Robert Dykstra, Herbert Johnson, Ferman Lanning, Robert Spong, Robert Swanson and John Wiederholt. Memorials are preferred to the Cannon Falls Community Hospital (1116 Mill St. W., Cannon Falls MN 55009) and the Cannon Valley Trail (825 Cannon River Avenue, Cannon Falls MN 55009.)

To order memorial trees or send flowers to the family in memory of Robert O'Gorman, please visit our flower store.