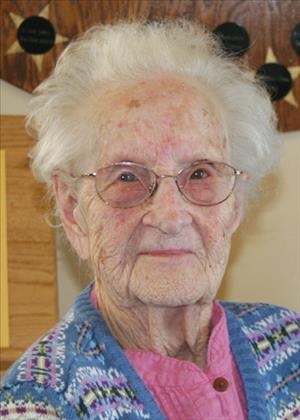 Rose Agnes Wilson, age 102 of Cannon Falls, died peacefully on Saturday morning, July 19, 2014 at Diamond Rehab and Living of Cannon Valley in Cannon Falls. Rose was born Rose Proulx on December 29, 1911 in Centerville, MN, the daughter of John and Agnes (Poirier) Proulx. Her family lived on a nearby farm in an area that was mostly French Canadian, where most spoke both French and English. Since her father was the area fiddler, Rose grew up in a very musical household. Rose moved to Cannon Falls to work at Mineral Springs Sanatorium, where she worked both in the kitchen and with the tuberculosis patients. There Rose met and married a fellow worker, Cannon Falls resident George Wilson in January, 1931. Together they raised four children. Rose held different jobs in the area. She worked at Red Owl grocery store for several years, Windy Acres as the main day cook, and later Kid Duds. She was first a packer, then as a quality and floor manager, retiring from Kid Duds after many years. Rose had been an active member of Episcopal Church of the Redeemer for 83 years. She was the oldest member of her church, and continued to play an active role in the church's activities, including Bible study. Rose had long been a member of the Eastern Star and regularly enjoyed the activities at senior citizens and sewing club. During her years as a quilter, she completed quilts for each of her children and grandchildren. Rose enjoyed traveling to various parts of the United States, Europe and the Middle East. She and her husband built their home near the little Cannon River, where she continued living until moving to Angels Care Center in 2011. Rose had friends both young and old, and kept busy around her home and in the community. She enjoyed good health, but it is her curiosity and her interests that have kept her young at heart. She is survived by her four children, Marilyn (Andrew) Otto of St. Paul, Dr. Joyce Wilson of Albuquerque, NM, Gay Hart of Fridley, and James (Geraldine) Wilson of Des Moines, IA; six grandchildren, Michelle Hart, Mark Hart, Barry Hart, Dr. Carrie Wilson Emdanat, Jane Lucy, and Timothy Wilson; and seven great-grandchildren, Maria, Jorge, Preston, Lily, Charlie, Sam, and Noah. She was preceded in death by her husband, George in 1974; five siblings; and Michael Hart, a very recently lost and loved son-in-law. A memorial service will be held on Saturday, July 26 at 10:00 a.m. at the Episcopal Church of the Redeemer in Cannon Falls. Private interment at Cannon Falls Cemetery. Memorials may be given in Rose's name to the Church of the Redeemer or donor's choice.

10:00 AM
Episcopal Church of the Redeemer

To order memorial trees or send flowers to the family in memory of Rose Wilson, please visit our flower store.