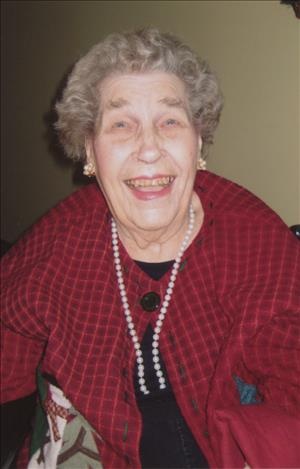 Ruby Magnuson, age 95 of Cannon Falls, died at The View on Friday evening, July 11, 2014. She was born on April 6, 1919 in Leon Township, the daughter of Irene (Johnson) and Joseph Ring. She grew up in Cannon Falls and the Hagen Farm near Urland Church. Ruby attended country school, and then lived with her grandparents and aunts in Red Wing, graduating from Red Wing High School in 1937. She took teacher training and taught rural schools for over five years. During that time she met and married Ralph Magnuson on August 20, 1941. They lived on Ralph's home place the first five years of their marriage then moved to the farm that they lived on the remainder of their 61 years. Thirteen years after they were married their only daughter Yvonne was born. Ruby was very involved in the life of Spring Garden Lutheran Church, where she was a member. She directed many Sunday School Christmas programs, taught 7th and 8th grade Sunday school for many years as well as being the Jr. Choir director where many a choir member learned a number of Swedish songs including Hosianna! She also sang in the church Sr. choir. Ruby held many leadership positions in the local and regional church women's organizations as well as being involved in woman's bible study and sewing circle. Ruby wrote for many years as a Leon Township correspondent for the Cannon Falls Beacon and Red Wing Republican Eagle. She loved country life—growing her flowers, roses, strawberries and vegetables, and loved watching the birds. She also hosted a birthday Christmas Eve brunch for Ralph every year except when it fell on Sundays. After Ralph's retirement, she and Ralph traveled all over the country and to foreign countries as well. After Ralph died she continued to live on the farm and then lived with daughter Yvonne and son-in-law Jon for two years, and the remainder of her life resided at the View Senior Living. Ruby brought a ray of sunshine to everyone she met with her smile. She lived a grace filled life. Ruby is survived by her daughter Yvonne and son-in-law Jon Salmonson, two grandsons Noah and Conor; brother Walter and sister-in-law JoAnn Ring; sister-in-law Lois Ring; as well as many nieces and nephews. She was preceded in death by her parents; husband, Ralph; infant sister Inez; sister Marcella and brothers Lowell and Arnold. Visitation will take place 4-7 PM Tuesday at Spring Garden Lutheran Church. Funeral service will be held on Wednesday, July 16 at 11:30 a.m., with visitation from 10:30-11:30-11 a.m., at Spring Garden Lutheran Church. Interment will follow at the Church Cemetery. Pallbearers will be Mark Swanson, Paul Swanson, Peggy Keller, Stuart Ring, Garry Ring, Laura Ring. Honorary pallbearers will be Arlen Trelstad, Melvin Trelstad, Jim Magnuson, Lyle Magnuson, Annette Bailey, Phyllis Benz, Marie Peterson Marge Larson, Lois Scanlin, and Jerry Magnuson. Arrangements by Lundberg Funeral Home, Cannon Falls. On-line condolences may be directed to www.lundbergfuneral.com.

and one hour prior to funeral at church

To order memorial trees or send flowers to the family in memory of Ruby Magnuson, please visit our flower store.