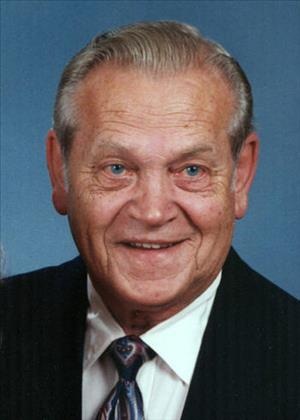 **Please note: Hwy 19 from Northfield to Cannon Falls will be closed starting August 5** Russell Eugene Tesch, age 84 of Cannon Falls, died on Wednesday morning, July 31, 2013 at St. Mary's Hospital in Rochester. He and his wife, Cleo have resided at Twin Rivers Senior Campus for the past three years. Russ was born on August 30, 1928 in Canby, MN, the son of Richard and Amelia (Brandt) Tesch. He grew up in Canby and went on to serve during WWII with the US Navy. He earned his GED while serving his country. Following his honorable discharge, he started working at Centel Telephone Company. He started as a lineman and worked his way up to a regional manager of maintenance and switching. He married Cleo L. Baack on September 24, 1950 in Slayton, MN. They lived in Madison, MN where they raised their children and were members of Faith Lutheran Church. Russ also served on the city council, was a Chamber of Commerce member, former Mason, and former volunteer fireman. They moved to Canby, Worthington and Fort Dodge, IA until his retirement in 1986. At that time, they moved to Litchfield and were members of Zion Lutheran Church. Russ was also a member of the VFW/American Legion, and Forty and Eight organization. He was preceded in death by his parents; infant daughter; and brothers, Delbert and Richard Tesch. He is survived by his wife of over 62 years, Cleo; daughters, Corinne (Keith) Kreft of St. Peter, Cathy (Bob) Bangtson of Goodhue, and Connie (Jim) Graham of Rosemount; 7 grandchildren and 8 great-grandchildren, Laura (John Branon) Ballman of Colorado Springs CO and their children, Isaac and Ava Branon, Noah Kreft (fiance, Cory Wendt) of Great Lakes Naval Base, IL, Justin (Alicia) Bangtson of River Falls, WI and their children, Cayden, Blake and Andrew, Emily (Jamie) Staples of Red Wing and their children, Elsa and Brahm, Jacob (Kari) Bangtson of Minturn, CO, Nicholas Graham of Burnsville, and Joel (Heather) Graham of Hastings and their daughter, Sophia; brother, Robert D. (Janice) Tesch of Omaha, NE; and many nieces and nephews. A memorial service will be held on Monday, August 5 at 11:00 a.m., with visitation from 10-11 a.m., at First English Lutheran Church, 511 W. Belle St., Cannon Falls with Pastor Eric Natwick of Trinity Lutheran Church, St. Peter officiating. Interment with military honors will be held later at Fort Snelling National Cemetery. Honorary pallbearers will be his grandchildren, Laura Ballman, Noah Kreft, Justin Bangtson, Emily Staples, Jacob Bangtson, Nicholas Graham, and Joel Graham. Memorials are preferred to an American Legion Post or VFW Post of donor's choice.

To order memorial trees or send flowers to the family in memory of Russell Tesch, please visit our flower store.