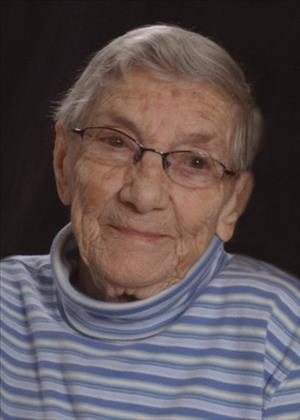 Ruth Sophia "Bootsie" Rogers, age 88 of Cannon Falls and formerly of Williamsport, PA, died peacefully on Tuesday morning, July 12, 2016 at Valentine's Assisted Living in Red Wing. Ruth was born on March 18, 1928 in Williamsport, PA, the daughter of Francis and Marguerite Abbott. She married Frederick Rogers on December 16, 1966 and lived in Williamsport until Fred's death on August 26, 2003. In October 2003, she moved to Cannon Falls to live close to her daughter, Cheryl and her family. Ruth was a member of St. Pius V Catholic Church, Cannon Falls. She was an avid doll collector and was so very talented at sewing and crocheting. She especially enjoyed making doll clothes of all kinds. She is survived by her beloved children, Frederick Grunsby of Muncy, PA, Barbarann Miller of Williamsport, PA, and Cheryl (Robert) Siebenaler of Cannon Falls; stepdaughters, Margaret (Thomas) Slusser of Bloomsburg, PA and Phyllis (Jim) Barger of South Williamsport, PA; and sister, Mary Lou Michel of Barnegate, NJ. She is also survived by her many grandchildren, great-grandchildren and great-great- grandchildren, who were such a great source of pride and were loved deeply by her. Ruth lived at Stonehouse Apartments in Cannon Falls for 11 years and made many great friends there. For the last 4 months of her life she lived at Valentine's Assisted Living in Red Wing. Ruth will be remembered for her spunk and her love for those that she was close to. She is preceded in death by her parents; six of her brothers and sisters; her beloved son-in-law, Edward Miller; and daughters-in-law, RoseMary and RoseAnn Grunsby. Ruth will be buried in Williamsport next to her husband, Fred in Twin Hills Memorial Park at the convenience of the family. Memorials are preferred to Red Wing Hospice or St. Pius V Catholic Church, Cannon Falls.

To order memorial trees or send flowers to the family in memory of Ruth Rogers, please visit our flower store.