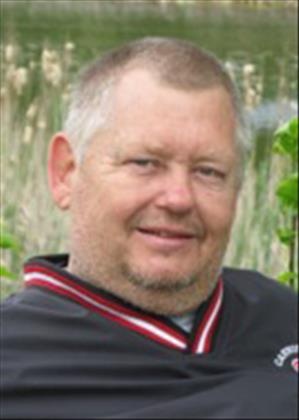 Scott G. Dockter, age 54 of Hopkins and formerly of Cannon Falls, died unexpectedly on Wednesday morning, August 6, 2014 at Abbott Northwestern Hospital in Minneapolis. Scott was born on June 21, 1960 in Cannon Falls, the son of Jacob "Jack" and Sharon (Holm) Dockter. He graduated from Cannon Falls High School in 1978, and went on to honorably serve with the U.S. Navy from 1978-1982. He married Diana (Eddy) on November 8, 2008 at The Little Brown Church in Nashua, IA. Scott was a 26-year employee with Swissport at Minneapolis International Airport. He was a member of Gethsemane Lutheran Church in Hopkins, and of the Rosetown American Legion Post #542 in Roseville. Scott enjoyed playing cribbage with his dad, listening to music, and spending time with his good friends. He loved spending time with his family, and his favorite cat "Kabob", and being a new Grandpa! He is loved and will be missed! He is survived by his wife, Diana; daughters, Samantha, Alison and Michelle, all of Roseville, and Jimilyn (Ryan) Meyer of Shoreview; grandson, James Meyer; parents, Jack and Sharon Dockter of Cannon Falls; sister, Chris (Tony) Busiahn and brother, Jeff (Val), all of Cannon Falls; sisters-in-law and brothers-in-law, Belinda (Mike) Carlson of St. Francis, and William (Jackie) Eddy of Albertville; mother-in-law, Donna Eddy of Zimmerman; former wife, Dawn Dockter of Roseville; and many nieces, nephews, Godchildren, cousins, aunts, uncles and very good friends. He was preceded in death by an infant brother, Jamie; grandparents; cousins, Jason Provost and David Dockter; aunt, Marlene Erickson; and uncle, Donnie Dockter. A memorial service will be held on Monday, August 11 at 3:00 p.m. at Rosetown American Legion Post #542, 700 W. County Rd C in Roseville. A funeral service will be held on Tuesday, August 12 at 11 a.m., with visitation from 10-11 a.m., at St. Ansgar's Lutheran Church, 7459 Hwy 19 Blvd, Cannon Falls. Interment with military honors will follow at the Cannon Falls Cemetery. Active pallbearers will be Jeff Dockter, Tony Busiahn, Bill Eddy, Mike Carlson, Ryan Meyer, and Mike Erickson. In lieu of flowers, memorials are preferred to donor's choice.

To order memorial trees or send flowers to the family in memory of Scott Dockter, please visit our flower store.