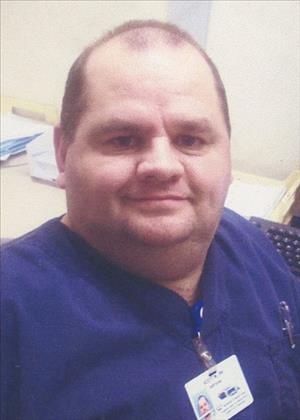 Scott Allen Miller, age 51 of Cannon Falls, died on Tuesday afternoon, March 11, 2014 at the Providence Place in Minneapolis. Scott was born on November 22, 1962 in Minneapolis, the son of Ray and Carol (Hall) Miller. He graduated from Anoka High School in 1980 and went on to serve with the U.S. Army for 6 years. He was working as a lab technician when he met his future wife. He married Jackie Spicer on November 24, 1990. He later attended nursing school, and graduated from Kirkwood College in IA. He was employed as a Registered Nurse at the VA Medical Center until retiring due to ALS. Scott was a member of Our Saviour's Ev. Lutheran Church in Cannon Falls and was a life member of the VFW. He will be remembered for his unique sense of humor by his family and friends. He was compassionate and personable, which made him a great nurse. He loved spending time with his family. He is survived by his wife of 23 years, Jackie; four daughters, Nicole of Muscatine, IA, Cymbre (Stephen Walters) of Waupun, WI, Jonna of Bemidji and Katia "Tia" of Cannon Falls; grandson, Gavin of Waupun, WI; mother, Carol of Andover; brother, Randy (Krista) of Coon Rapids; sister, Shelly (Scott) Parsons of Coon Rapids; nephew, Alexander and many other nieces and nephews; mother-in-law, Rev. Donna Spicer, who has lived for the past 9 years with them; and sisters-in-law and brothers-in-law, Julie and Wayne Smith of Hibbing, Jae and Kraig Wuori of Chisholm, Tim and Kris Spicer of Bueler, KS. He was preceded in death by his father, Ray. A visitation will be held on Sunday, March 16 from 4-7 p.m. at Lundberg Funeral Home in Cannon Falls. Funeral service will be on Monday at 11 a.m., with visitation from 10-11 a.m., at Our Saviour's Ev. Lutheran Church in Cannon Falls. Pallbearers will be Kraig Wuori, Wayne Smith, Tim Hanenberger, Mike Doyle, Tim Spicer and Stephen Walters.

To order memorial trees or send flowers to the family in memory of Scott Miller, please visit our flower store.