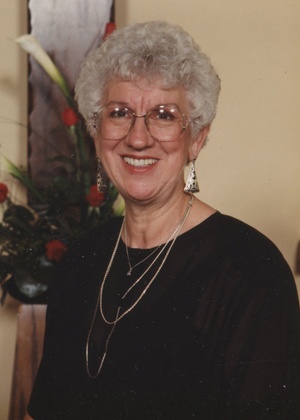 Shirley Foss, age 89, of Cannon Falls, died Sunday, March 12, 2017 at the Kenyon Sunset Home in Kenyon. Shirley Renee Foss was born on December 20, 1927 in Cannon Falls, the daughter of Benjamin C. and Dorothy (Benson) Holmes. She grew up in the Cannon Falls area and went to country school. Shirley graduated from Cannon Falls High School in 1945 and then attended Normal School. She taught school for a year before her marriage to LeRoy Foss. She then stayed home and raised her family. After her children were grown, Shirley returned to school at Mankato State College. She worked was a substitute teacher in the Kenyon and West Concord School Districts. She and LeRoy moved to Bagley, Minnesota where they lived for several years. Shirley was very proud of her Swedish heritage, and was the owner and manager of Hembygd, a Scandinavian gift store there. When LeRoy became ill, they returned to Cannon Falls. Shirley was a Past President of the Kenyon VFW Auxiliary, and a Past Chairwoman of the Goodhue County Democratic Party. Her faith was very important to her. She was a member of the First Evangelical Lutheran Church in Kenyon and Faith Lutheran in Bagley. She was active in the Ladies' Aid and taught Sunday School. Survivors include her children Christine Foss, William (Ami) Foss, Mariana (Mike) McDonald, Julia (Bob) Miller, Theron Homeier-Foss, and Ramona (Ken) Djernes, many grandchildren and great-grandchildren, sisters-in-law Marilyn Schaper, Ceal Foss, JoAnne Holmes, and Helen Holmes, as well as numerous nieces and nephews. She was preceded in death by her husband LeRoy, her sons Eric, Paul, and Theodore (Ted) Foss, her parents Chester and Dorothy Holmes, and siblings Dolores Wrolstad, Yvonne Seidel, Carmen Lilleboe, John Holmes, and Roger Holmes. There will be a memorial visitation for Shirley on Saturday, March 18, 2017 at the Lundberg Funeral Home in Cannon Falls from 3-5 pm. Interment will be in the Kenyon Community Cemetery at a later date. Memorials are preferred to her family.

To order memorial trees or send flowers to the family in memory of Shirley Foss, please visit our flower store.