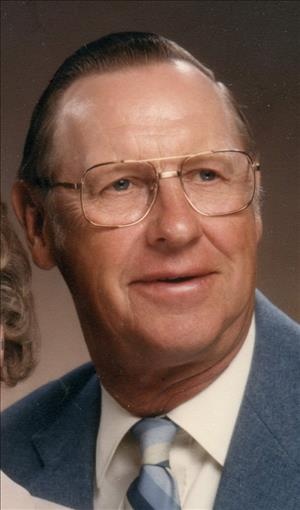 Sterling W. Nelson, age 90 of Cannon Falls, formerly of Vasa, died peacefully in Cannon Falls on Thursday afternoon, January 22, 2015. Visitation will be held on Sunday from 2-5 p.m. at Lundberg Funeral Home in Cannon Falls. Funeral service will be held on Monday at 11 a.m., with visitation from 10-11 a.m. at Vasa Lutheran Church, with Pastor Kristi Mitchell officiating. Interment with military honors will follow at the church cemetery. Memorials are preferred to the Vasa Museum. Sterling Wallace Nelson was born to Bennett and Myrtle (Johnson) Nelson on April 11, 1924 in Cannon Falls Township, Minnesota. He attended Five Mile School House in rural Cannon Falls and worked as a farm hand in his early years. In February of 1945 he entered active duty with the US Army 35th Infantry Division. During WWII, he served in the Philippines and post war operations in Hiroshima and Nagasaki, Japan and was honorably discharged in December of 1946. Upon his return, he began working at S.B. Foot Tanning Company and was employed there for 39 years. Sterling was united in marriage to Grace Miller on March 8, 1947 at Spring Garden Lutheran Church. They purchased a farm in 1950 in Vasa, Minnesota where he pursued his love of farming and the family enjoyed many years together. He was a long-time member of Vasa Lutheran Church and active on the Vasa Township Board for many years. In 2013 they moved to Cannon Falls. Sterling and Grace loved to explore and traveled extensively throughout the world. Sterling is survived by his wife Grace Nelson of Cannon Falls; Children, Bruce (Barbara) of St. Paul, MN, Roger of Roseville, MN, Carol Hansen of New Richland, MN, Donald (Marilyn) of Caney, KS, and Dareld (Carolyn) of Edna, KS; grandchildren, Benjamin and Patrick Nelson, Levi (Melanie) Hansen, Maja (Hansen) Kirby, Bretta Hansen, Sarah, Craig and Ryan Nelson, Jennifer and Natalie Nelson; great-grandchildren, Levi Kirby and Isaac Sterling Hansen; sister-in-law Lola Nelson and also extended family. He is preceded in death by two brothers, DeVere and Merle and one sister, Helen (Everett) Lindquist. Casketbearers will be Craig and Ryan Nelson, Patrick Nelson, John Nelson, Erik Rigelhof and James Peterson.

with visitation at church from 10-11 am

To order memorial trees or send flowers to the family in memory of Sterling Nelson, please visit our flower store.