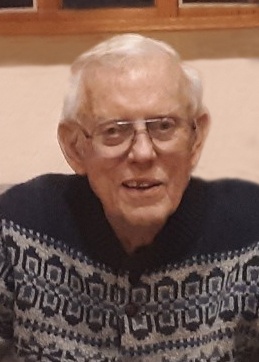 Sterling was born on February 6, 1927 in Leon Township, MN, the son of Carl and Ruby (Banks) Sorenson.

Sterling grew up in Spring Garden with his brother, Conrad and sister, Ardis, where he worked on their family farm. At 17, he enlisted in the US Navy for the duration of World War II where he served in the Philippine Islands. He was always proud to have served his country. Upon his honorable discharge in 1946, he returned to work for area farmers. Sterling then began working for SB Foot Tanning Company in Red Wing. In the Spring of ’47 he went back to work for his family’s farm.

After getting married to the love of his life, Sharyn Gustafson on September 5, 1953 at Vasa Lutheran Church, he continued farming. Sterling went into carpentry in 1969 and worked on various projects including the remodeling of the Saint James Hotel in Red Wing. Sterling retired as a carpenter from Prairie Island Nuclear Plant in 1992.

He served on the Belle Creek Creamery Board, Belle Creek Watershed Board, and was a member of the American Legion Post #54 in Red Wing, Cannon Falls VFW Post #4452, and the Carpenters and Joiners Union, Local #322.

Sterling dearly loved his wife Sharyn and family. He enjoyed spending time with each and every one of them. He enjoyed their fun camping trips spent with family and friends. He shared his love of hunting, especially deer, with his children. Sterling also loved fishing of any kind – winter ice fishing and summer, where he spent time out on his boat. Sterling loved watching his favorite football team, the Vikings, play on TV. He was also known for his wicked good sense of humor and good-natured tricks.

Sterling was an accomplished carpenter. He crafted many items with wood including cedar chests, mirrors, snowmen, Santas, birdhouses, birds, etc for his children, grandchildren, and great grandchildren.

One of Sterling’s favorite hobbies was playing cards. He and Sharyn had great fun as part of a card club for over sixty years with lifelong friends. He also enjoyed teaching his family how to play his favorite card games of Cribbage and Euchre – both of which he was known to be extremely skilled at. His other favorite game was Dominoes, another lucky game for him. Later on he picked up a new hobby of smoking salmon, one of his favorite foods.

All his life, Sterling had a deep and abiding faith in his walk with Jesus Christ. He was a long-time member of the Vasa Lutheran Church, participating and supporting its mission, and serving on church council.

Sterling welcomed everyone who came through the door. Anyone who was fortunate to know him was blessed. He was a very humble man, full of grace, laughter, and most especially love. He leaves behind a legacy of amazing memories for all, living in the hearts of his wife and family.

He will be lovingly remembered and greatly missed by his wife of over 65 years, Sharyn; children, Debbie and Bill Bean of Hibbing, Kathy and John Madigan of Red Wing, Scott and Lisa Sorenson of Gorham, ME, Kelly Thorne and Russ Rhone of Shakopee, and Kerry Sorenson and Lindsay Lyons of New Prague; 18 grandchildren, Ashley and Mark Lykins of Duluth, Brittany and Andrew Merkouris of Richfield, Brian and Charity Peine of Red Wing, Joe and Erin Peine of Andover, KS, Arielle Sorenson and Lydia Proulx, Zachary Sorenson, Jonathon Gray, Leeanna Gray of Gorham, ME, Chelsea and Jamin Lynch of Selah, WA, Lacey Thorne and Chris Blanchard of Yakima, WA, and Ava Lyons of New Prague; 19 great grandchildren, Will, Wyatt, Ellie Lykins, Wendy and Aleck Merkouris, Gage and Tanner Peine, Justen Quinn, Ginaya Johnson, and Maddison Russelle, Allison, Abigail, Alexa, and Tyler Peine, Ella, Reese, and Lincoln Lynch, Collin and Laylah Blanchard; and many nieces and nephews.

Visitation will be held on Sunday, August 11 from 3-6 p.m. at Lundberg Funeral Home, Cannon Falls.

A Celebration of Life Service will be held on Monday, August 12 at 2 p.m., with visitation from 1-2 p.m., at Vasa Lutheran Church, 15235 Norelius Rd in Vasa. A military honors farewell will follow the service outside of church.

To order memorial trees or send flowers to the family in memory of Sterling Sorenson, please visit our flower store.